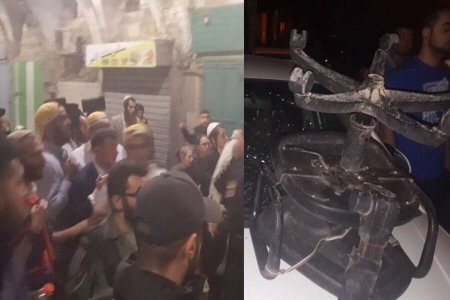 A Palestinian shop owner was hospitalized after hundreds of extremist Israeli settlers rioted in the Jerusalem’s Old City, an eyewitness told mass media.

Approximately 400 extremist Jewish-Israeli settlers marched through the Old City from Al-Buraq Wall of Al-Aqsa Mosque towards the Damascus Gate, an eyewitness said, according to Days of Palestine.

While they were walking, the extremists were shouting, beating the doors of houses and shops, throwing rocks and smashing car windows.

As they approached Damascus Gate, they stormed an open shop and attacked the shop’s Palestinian owner, who was taken to Hadassah University Hospital to be treated for his wounds.

Later on, about 20 Israeli police officers arrived at the scene and escorted the rioters out of the Old City.

However, no arrests were made. Police issued a statement, on Thursday morning, saying that there had been a fight between two groups of youth.

Police confirmed that an investigation had been opened into the incident, and that damage had been caused to a shop and a number of motor vehicles.

Louis Zorba, a resident in the area, spoke to Haaretz saying: “I heard shouts and banging on the houses, but we are used to it because it happens every time there is a Jewish holiday.”

“I told the officers that if it were Palestinians who were rioting, they would have sent for reinforcements, and probably shot tear gas and stun grenades.”

NGO Ir Amim said: “This is not the first time that the police have not done their job to protect the Palestinian residents of East Jerusalem.”

The NGO accused the police of attempting to hide the nature of the attack when it described it in as a fight between groups of youths, and not as an attack on Palestinians and their property.