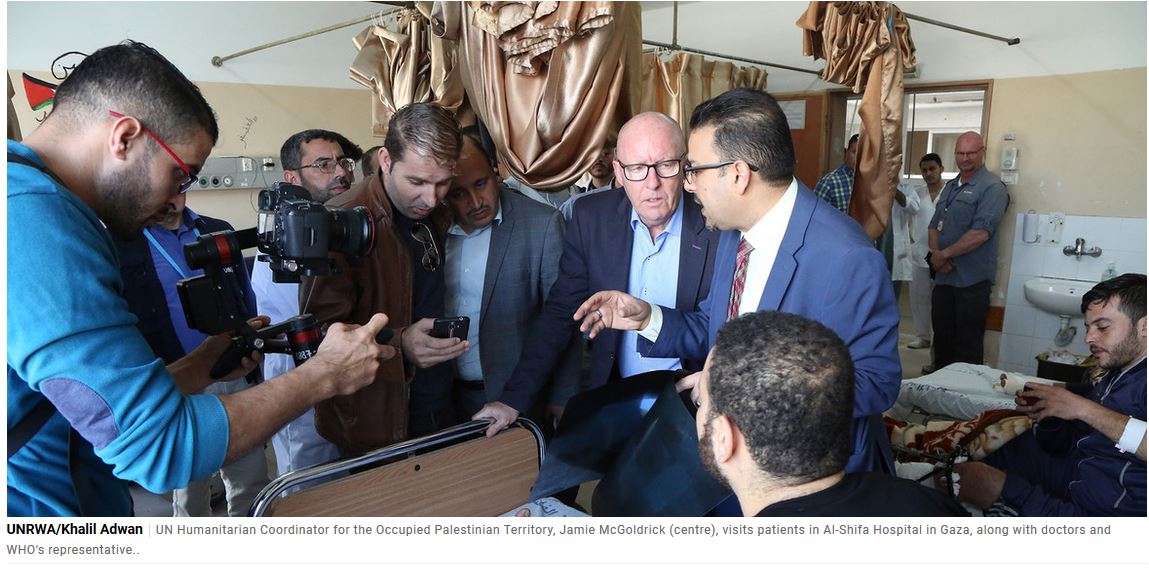 By UN News: Millions of dollars in emergency funding is needed in Gaza to save the shattered limbs of some 1,700 people who have been seriously injured in demonstrations against Israel along the border fence, a top UN humanitarian official said on Wednesday.

In an appeal for $20 million to help victims hurt during protests dubbed the Great March of Return – weekly rallies on Fridays by Gazans that began a year ago, leaving 29,000 people injured, many by live ammunition – Jamie McGoldrick, Humanitarian Coordinator for the occupied Palestinian territory (oPt), said that more resources were urgently required.

“The health structures really are in bad shape and that’s why we have put this appeal out for $20 million to address the needs of those 1,700 people, but also to support the health system”, he said.

“Of that 29,000, 7,000 have been shot with live ammunition and those are the ones who have been treated at facilities that are under very serious stress anyway”, Mr. McGoldrick added.

To date, some 120 amputations have taken place since the beginning of the demonstrations, according to the UN official, with 20 children among the amputees.

‘Running against the clock’

“We are running against the clock for some of these cases and osteomyelitis – bone infection – will be a crisis, and the need is to treat that, prevent that, otherwise we will have amputations,” he said. “The technical abilities of doctors on the ground to carry out treatment required for the 1,700 (injured demonstrators) just doesn’t exist.”

Speaking in Geneva following a lull in deadly violence over the weekend at the Israel-Gaza border between militant groups in Gaza – which is controlled by Hamas – and Israeli security forces, Mr. McGoldrick insisted on the need for dialogue to address the dire economic and humanitarian situation there.

He confirmed that UN Special Coordinator for the Middle East Peace Process, Nickolay Mladenov, was in Cairo to reinforce the fragile Gaza ceasefire deal reportedly mediated by Egypt, adding that he hoped this would allow humanitarian deliveries to resume “because we were prevented from doing work, because of the insecurity and instability”.

Today, average household debt in Gaza is $4,000, the UN official explained, noting that average salaries are $400 a month. The situation has been made worse by chronically high youth unemployment and the fact that the UN’s $350 million humanitarian appeal for 2019 is funded at only 14 per cent.

“It’s not going to get any better, it’s getting worse,” he said. “If you look at the number of shops that have closed because of debt…people are using all sorts of means, selling assets, doctors going abroad leaving the family and sending remittances back, we’re hearing that the indebted nature of some of the poorest families is quite heavy.”

During the recent military activity, hundreds of rockets were launched from Gaza by Palestinian militants into southern Israel, and hundreds of airstrikes and tank rounds were fired in return, causing 29 fatalities in Gaza and four in Israel, along with some 200 casualties on each side.

“The situation is very precarious,” Mr. McGoldrick said. “And I think the need for a political solution is all the more highlighted because of how easy it is to slip into something very quickly.”