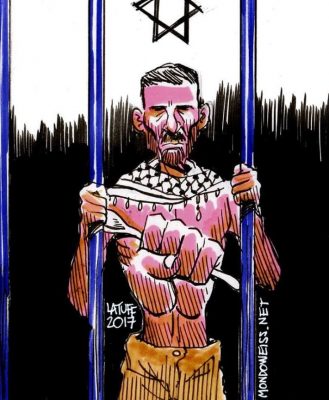 The head of the Palestinian Detainees Committee, Issa Qaraqe, has reported that as the Palestinian detainees in Israeli prisons enter their 39th consecutive day of the hunger strike, many of them have reached life-threatening health conditions and complications.

Qaraqe’ stated that Israel is still rejecting the legitimate basic demands of the detainees, and is refraining from holding serious talks with them.

In an interview with the Palestine Radio, Qaraqe’ said that contacts have been made with many legal and international organizations and human rights groups, in an attempt to push Israel to abide by International Law, and provide the detainees with their internationally guaranteed rights.

He added that Israel realized its so-called “field clinics” in front of several prisons, are insufficient and cannot house the considerable number of detainees, an issue that pushed the Prison Administration to move many of them to hospitals.

The Palestinian official also stated that Israel’s ongoing disregard of the legitimate demands of the detainees could lead to the death of many detainees, especially since dozens are facing very critical health conditions.

The detainees are demanding basic rights, including being able to have direct body contact with their visiting families, the right to adequate medical care, and ending the arbitrary Administrative Detention policies, holding them hundreds captive, without charges or trial.