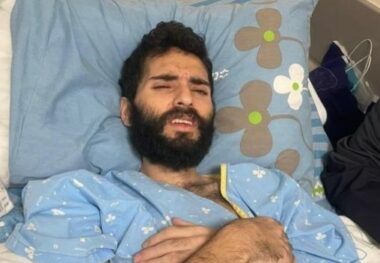 The Palestinian Prisoners’ Society (PPS) said the hunger-striking detainee, Miqdad al-Qawasma, who continues his strike for the 90th day, was moved to the Intensive Care Unit at the Kaplan Israeli medical center.

PPS lawyer Jawad Boulus stated that Al-Qawasma suffered a serious health setback, in addition to his already serious condition, as he continues the strike protesting his arbitrary Administrative Detention without charges or trial.

He added that al-Qawasma could die at any given moment, especially since he apparently now suffers from a neurological condition that could pose more immediate threats to his life.

Boulus also said that two detainees, Ala’ Al-A’raj, who started the hunger strike 73 days ago, and Hisham Abu Hawwash, who started the strike 64 days ago, were transferred from the Ramla Prison clinic to a civilian Israeli hospital due to their deteriorating health condition.