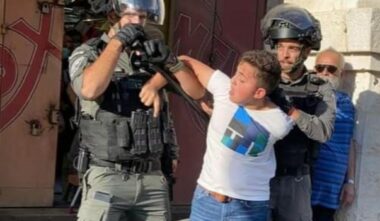 Silwanic stated that most of the violations took place near Bab al-Amoud, leading to the Al-Aqsa Mosque and the areas surrounding the holy site, especially the al-Misrara neighborhood and Sultan Suleiman Street, when the soldiers assaulted dozens of Palestinians, who were trying to reach the Al-Aqsa Mosque, to celebrate the Mawlid ash-Sharif Muslim Feast.

Silwanic attorneys Mohammad Mahmoud and Firas al-Jebrini stated that most of the abducted and detained Palestinians have been beaten, and suffered various wounds, especially to the face, neck, and arms.

They said that, although it took a long time to be allowed to visit with the detainees, they found out that they were not allowed to use the bathroom, and were not given any food or even water.

In addition, undercover Israeli soldiers kidnapped Rami ar-Razem, 20, near the Sahera Gate, after constantly assaulting him and striking him with their guns.

Medics were only able to see him hours after his injury when they were finally allowed into an interrogation facility in the occupied city.

It is worth mentioning that the police released some of the abducted Palestinians after hours of interrogation, while most are still detained, awaiting interrogation.

Silwanic identified the abducted Palestinians as: