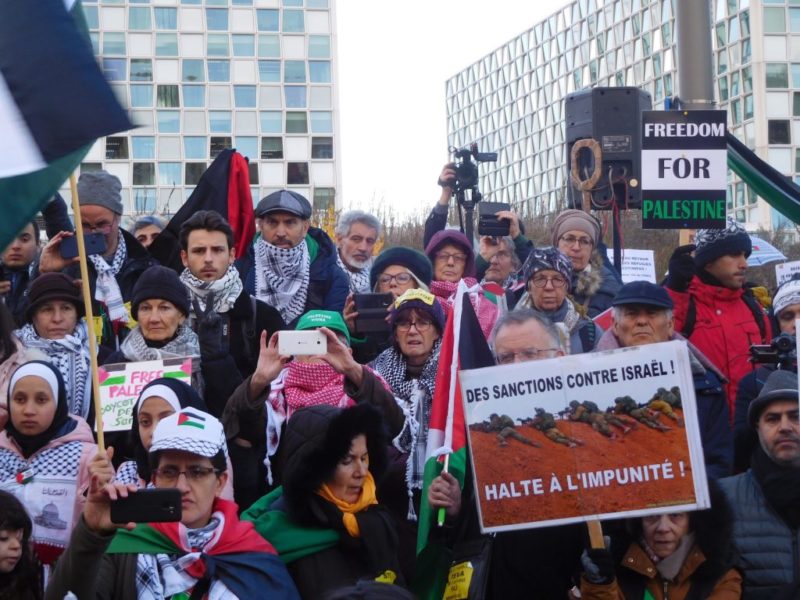 The Chief Prosecutor of the International Criminal Court, Fatou Bensouda, issued a¬†statement on 20 December 2019¬†that the ICC will be opening an official investigation into Israeli war crimes and crimes against humanity in occupied Palestine. The announcement comes after years of Palestinian struggle for recognition and a fair hearing at the court, including the¬†support of international legal organizations¬†and advocates.

In particular,¬†Khalida Jarrar, the imprisoned Palestinian leftist, feminist and legislator, has played a leading role in the campaign to hold Israeli officials accountable before the ICC. She participated in drafting Palestine‚Äôs application to join the ICC and has been a leading member of the Palestinian committee for presenting evidence to the ICC of Israeli war crimes and crimes against humanity. On 31 October, Israeli occupation forces once again arrested Jarrar, a case that was¬†featured in Human Rights Watch‚Äôs new report, ‚ÄúBorn Without Civil Rights: Israel‚Äôs Use of Draconian Military Orders to Repress Palestinians in the West Bank.‚ÄĚ

The Palestinian prisoners‚Äô movement has repeatedly urged the ICC to take action on Palestine, as highlighted in¬†this 2016 statement: ‚ÄúFourth, we call upon the Palestinian Authority and the Prisoners‚Äô Affairs Commission, and all national, legal and human rights organizations to raise the issue of the Palestinian prisoners at the International Criminal Court, the UN Human Rights Council, and the United Nations, in order to prosecute the occupation, and to expose its practices and daily violations of the rights of prisoners in Israeli jails.‚ÄĚ

The move by the ICC comes just over a week after over 200 international organizations, including Samidoun Palestinian Prisoner Solidarity Network, signed on to a collective statement urging the court to end its delays and move forward with a formal investigation into Israeli war crimes and crimes against humanity.

The¬†collective letter, reprinted below, was issued shortly after¬†hundreds of Europeans protested in The Hague¬†outside the ICC‚Äôs offices on 29 November, the International Day of Solidarity with the Palestinian People, to demand action and an end to Israeli impunity.

The ICC has been engaged in a¬†preliminary investigation into the situation in Palestine¬†for almost five years, aiming to establish if criteria are met for an official, full-scale investigation into possible war crimes and crimes against humanity, committed in the Occupied Palestinian Territories. The investigation should have led to a conclusion long ago.

The delay is not only inexplicable, it is also irresponsible. Absent an official investigation, Israel has been allowed to continue carrying out crimes with impunity. Most recently, on November 14th, over thirty Palestinians were killed in Gaza, many of them as a result of indiscriminate Israeli bombings. Among those killed were nine members of the same family, including five children. No wonder that ‚Äď by stalling an official investigation ‚Äď the ICC is in breach with its own mission, which it¬†describes¬†as follows:

The Court is participating in a global fight to end impunity, and through international criminal justice, the Court aims to hold those responsible accountable for their crimes and to help prevent these crimes from happening again.

It seems obvious that holding Israel accountable for its crimes against the Palestinians requires a loud voice. Over the last years many organizations have called on the ICC to take action, notably in September 2018, when a coalition of 25 organizations urged Ms. Bensouda to finalize the preliminary investigation. None of these calls bore fruit. That is why The Rights Forum has now taken the initiative to build a coalition that cannot be ignored.

To the attention of Ms. Fatou Bensouda, chief prosecutor

Oude Waalsdorperweg 10, The Hague, The Netherlands

Today, on Human Rights Day, the signatories of this letter call on you to open an official, full-scale investigation into the ‚Äėsituation in Palestine‚Äô without further delay.

Since January 2015 the International Criminal Court (ICC) has been engaged in a preliminary investigation into the ‚Äėsituation in Palestine‚Äô, focusing on possible war crimes and crimes against humanity committed in the Occupied Palestinian Territories. Unfortunately, almost five years into the investigation, you have yet to reach a conclusion. This delay is inexplicable.

It is also irresponsible. As the preliminary investigation drags on, the crimes continue. The Israeli colonization of occupied lands ‚Äď a war crime under the Rome Statute ‚Äď comes with the systemic violation and abuse of the human rights of millions of Palestinians. The Israeli occupation continues to take Palestinian lives.

The absence of an official investigation, this much is clear, has fueled the already existing culture of impunity. But it also affects the integrity and credibility of the ICC, and thereby the confidence of the public in a functioning legal order.

Over the last years, many have called on you to finalize the preliminary investigation. Among them human rights organizations, a broad civil delegation from Palestine, and Palestinian Foreign Minister Riad Malki. In September 2018, 25 international organizations urged you to act. You did not respond.

That is why we repeat their call today, on Human Rights Day:¬†Ms. Bensouda, open an official and full-scale investigation into the ‚Äėsituation in Palestine‚Äô without further delay.

On behalf of the signatory organizations,

« Al-Qanu: Gaza Border Rallies Will Not Stop Malaysia PM: “Israel Should be Tried by the ICC” »