Malaysia PM: “Israel Should be Tried by the ICC” 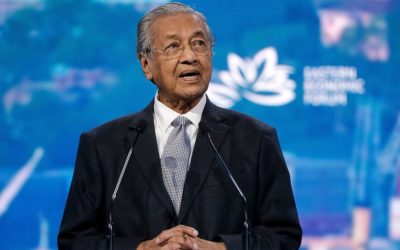 The Malaysian Prime Minister, Mohammad Mahathir, is the latest world leader to welcome the International Criminal Court’s (ICC) announcement that they are opening an investigation into Israeli crimes against the Palestinians in the occupied territories.

Mahathir said Israel should face justice over the atrocities committed against the Palestinian people, as quoted by the official Malaysian news agency Bernama.

“Israel should be tried by the International Criminal Court (ICC) for killing people, for stealing other people’s territory, for building settlements in other people’s land. All these things are crimes,” he told a press conference at the conclusion of the Kuala Lumpur Summit (KL Summit) 2019 yesterday.

Mahathir, who chaired the KL Summit, pointed out that Israel had even detained ships carrying out humanitarian missions in which Malaysian citizens were participating — while those ships were in international waters.

He said “the whole world not only closed one eye but they closed both eyes, and their mouths and their ears too”.

On Friday, the Prosecutor of the Hague-based International Criminal Court (ICC), Fatou Bensouda, announced that her office was going to open an investigation into Israeli crimes against the Palestinians in Palestine.

This article was sourced from a report by the Palestinian Wafa News Agency.