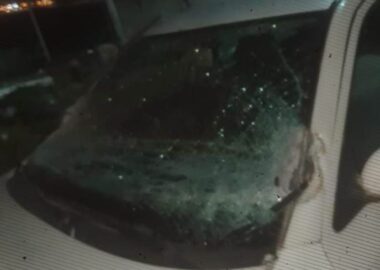 Sa’id Zeidan, the mayor of Deir Istiya, said the attack took place near the iron gate, which was installed by the army at the entrance of Bruqin.

Zeidan added that the colonists tied the gate with ropes and lifted it and waited for a car to drive underneath it before dropping it, and fled the scene.

Azzam Khalil Abu Hijla owns the vehicle, 50, and managed to escape the attack physically unharmed. However, the gate smashed the windshield and caused damage to the car.

Abu Hijla is from Deir Istiya town, northwest of Salfit.

On Monday morning, a group of illegal Israeli colonists installed a big tent on private Palestinian land in Qusra village, southwest of the northern West Bank city of Nablus.

The colonists came from the illegal Esh Kodesh colony, which was installed on stolen Palestinian lands.