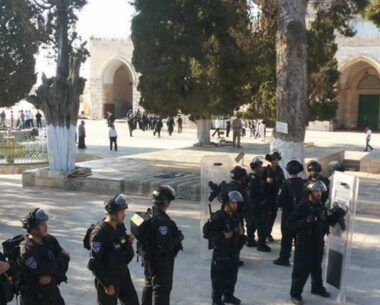 A large group of fanatic illegal Israeli colonists, accompanied by dozens of soldiers, invaded the courtyards of the Al-Aqsa Mosque, Tuesday, amidst calls for demolishing it, while the soldiers also assaulted a guard and handed him an order denying him entry to the holy compounds and surrounding area for six months.

The Palestinian Department for Waqf and Islamic Endowment has reported that the colonists, and the soldiers, invaded Al-Aqsa from the al-Magharba Gate, and conducted provocative tours, before leaving through Bas al-Silsila.

It added that the soldiers imposed severe restriction on the Palestinians, denying many of them access to the holy site, under the allegation of preventive measures due to coronavirus, and at the same time allowed dozens of colonists to invade it.

In addition, the grand Mufti of Jerusalem and Palestinian, the Khatib of Al-Aqsa Mosque, Sheikh Mohammad Amin Hussein, denounced Israeli calls to dismantle Al-Aqsa to build a Temple.

He said that Israeli colonialist groups have presented a “proposal” to the Israeli government, to allow the demolition of the historic holy site, and also asked the Netanyahu-led government to submit the proposal to Jordan.

In related news, the soldiers issued an order preventing Essam Najeeb, one of the civilian guards of Al-Aqsa, from entering the holy sites and its surroundings for six months.

The army said the Palestinian tried to prevent the soldiers and the colonists from entering the holy site.