Soldiers Injure Many Palestinians Near Hebron And Jenin 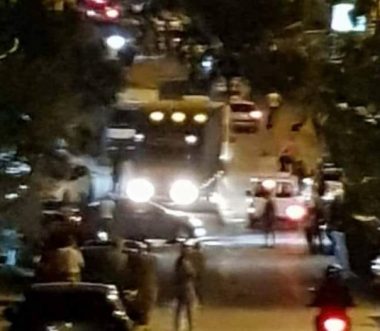 Israeli soldiers injured, on Monday evening, many Palestinians in the al-‘Arroub refugee camp and Beit Ummar town, north of the southern West Bank city of Hebron, in addition to Ya’bad town, southwest of the Jenin, in northern West Bank.

Media sources in Beit Ummar said dozens of soldiers invaded the town and started stopping cars and interrogating the resident while inspecting their ID cards, leading to protests.

They added that the soldiers fired many gas bombs and concussion grenades at the Palestinians, wounding a young man who suffered several burns in his arm after being directly hit with a gas bomb. Many Palestinians suffered the effects of teargas inhalation.

Local sources said the wounded young men, from Ya’bad and Sanour towns, were shot in the lower extremities while walking near the illegal Annexation Wall.

Palestinian medics rushed to the scene and moved the wounded young men to a hospital in Jenin city.