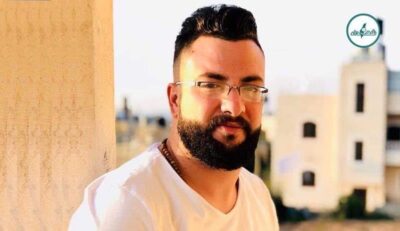 On Tuesday, Israeli forces shot and killed a 24-year-old Palestinian, identified as ‘Aahed Abdul-Rahman Mahmoud Ekhlayyel, 24, from Beit Ummar village, near the military base of Gush Etzion, in the southern part of the West Bank.

The Israeli soldiers claimed that Ekhlayyel had attempted to carry out a stabbing attack, but offered no evidence to support this claim.

After killing Ekhlayyel and holding his body, the Israeli military imposed a closure on the entire village of Beit Ummar, forcing all of the Palestinian residents to remain indoors, and preventing anyone from entering or leaving the village.

A squadron of Israeli soldiers then invaded the village and issued warrants for all the members of the Ekhlayyel family to come to Gush Etzion military base for interrogation.

According to a statement by the Israeli military, “(A) community security officer spotted a suspect approaching the junction. Following their suspicion, the security officer and a soldier operated to stop the suspect by firing into the air. The suspect then threw a knife, and the officer responded with live fire, neutralizing the suspect.”

Israeli forces frequently accuse Palestinians of knife attacks after killing them and have been known to plant knives on the bodies of dead Palestinians on a number of occasions.

The army closed the Gush Etzion junction to all Palestinian traffic after killing the young man.

After killing the young man, Israeli soldiers invaded Beit Ummar, before storming his family’s home and searching it.

The soldiers also summoned his family for interrogation in the Etzion military base and security center, north of Hebron, and closed the iron gate at the main entrance of Beit Ummar, in addition to preventing the Palestinians from entering or leaving it.

The army said it does not intend to transfer his corpse to his family for burial.

It is worth mentioning that, less than a month ago, Ekhlayyel opened a candy store to support his family.