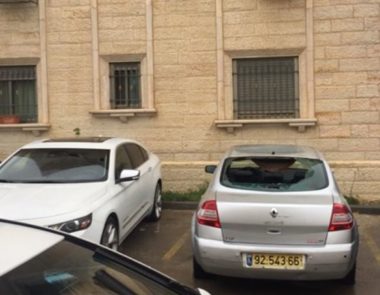 A group of fanatic illegal Israeli colonists infiltrated, on Monday at dawn, into a neighborhood in Beit Hanina, northern of occupied East Jerusalem, before writing racist graffiti, and caused damage to several Palestinian cars.

The colonists smashed the windows, including the windshields of several cars, and punctured their tires.

They also write racist graffiti on several parked cars, and walls, in the neighborhood before fleeing the scene.

The graffiti includes “death to Arabs,” and call for removing the Palestinian from the country.

Such attacks and violations are a common occurrence in several parts of the occupied West Bank, especially in Jerusalem.