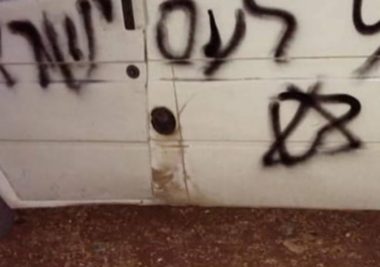 Several fanatic illegal Israeli colonialist settlers infiltrated, on Thursday at dawn, into Qarawat Bani Hassan village, west of Salfit in central West Bank, before writing racist graffiti on a few walls, including a mosque, and punctured the tires of at least 30 cars.

He added that the colonists wrote racist graffiti on the walls of many homes, the local mosque, and several cars.

Rayyan stated that the attack took place in an area which is subject to frequent Israeli violations, and added that, just a few days ago, the colonists burnt a barn, owned by a local, identified as Mahmoud Abdul-Aziz Mer’ey.