In Gaza, My Child Died Before My Eyes 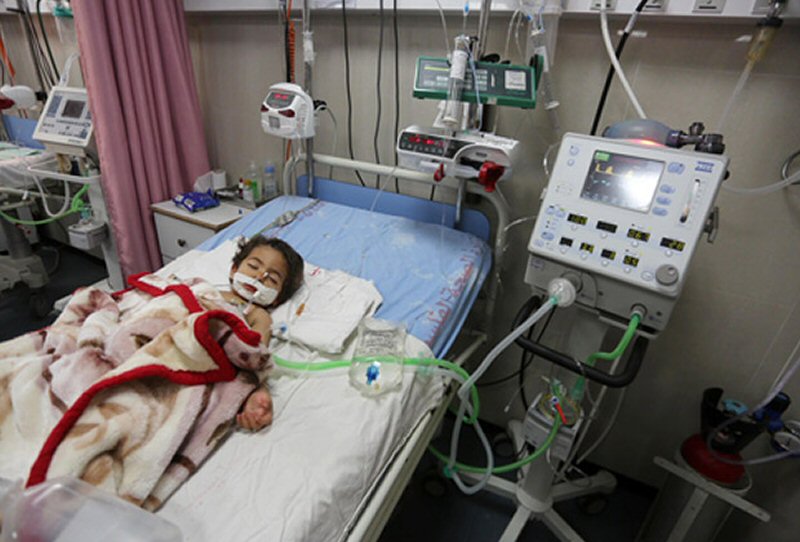 Wisam, a 6-year-old boy, coughs harshly as his father watches over his bed. Wisam has cystic fibrosis; Gaza’s hospitals lack the enzyme treatments he needs to stay alive.

The uncertainty about what will happen to Wisam is causing his father, Bahjat Abu Rashid, great anxiety. Two years ago, Bahjat’s only other son, Muhammad, died. Bahjat said that Muhammad had a heart problem and was prevented from receiving surgery in Israel.

“If this situation continues, I will lose my second son,” Bahjat said. “We’re paying the price of political conflicts.”

Wisam is being treated in Gaza City’s Abdelaziz al-Rantisi pediatric hospital. Doctors have told Bahjat that his son could die at any moment.

As treatment for cystic fibrosis is expensive, providing for the medical needs of people with this genetic disorder is difficult under any circumstances. Yet the problems of patients in Gaza have worsened a great deal recently.

The Palestinian Authority, which is based in the occupied West Bank, had been allocating around $4 million per month to Gaza’s hospitals until earlier this year. That sum was reduced to $2.3 million in April and to just $500,000 the following month.

The Kryon pills required by the more than 300 people in Gaza with cystic fibrosis, many of them children, are now unavailable.

Cutbacks by the PA have been introduced amid the latest friction between Fatah, the party dominating the authority, and Hamas, which is in charge of Gaza’s internal affairs. These reductions have inflicted enormous suffering on Palestinians in Gaza, who had already been under an Israeli siege for a decade.

Not even babies have been spared. Stocks of therapeutic milk needed for around 240 infants with enzyme deficiencies have also run out. Those children “will suffer life-long developmental problems” as a result, Physicians for Human Rights-Israel states.

The cutbacks are additional to a freeze on funding for energy. In April, the PA announced that it was halting payments to Israel for the supply of electricity to Gaza. Since then, the energy supply has fallen to an all-time low. On many days, Gaza has only received three hours of electricity – or less.

Hospitals have been hit especially hard by that move. Operations that require a continuous supply of energy for several hours have frequently been postponed. Additionally, kidney dialysis machines have not been able to function.

Huda Abu Madlala, 44, is among more than 300 people relying on the 45 dialysis machines in al-Shifa, Gaza’s largest hospital.

Abu Madlala is worried that she will die. She has had to forego dialysis because of power outages.

“We are dying because there is not enough electricity,” she said. “That is shameful. To politicians, we are just numbers. I do not know how my children will be able to live without me in a place that shows pity to nobody, not even sick people.”

Ashraf al-Qidra, a spokesperson for Gaza’s health ministry, said that the Palestinian Authority in the West Bank “deals with us in a malicious way.”

When patients in Gaza require treatment outside the Strip, their cases are referred to the PA’s headquarters in the West Bank city of Ramallah. According to al-Qidra, the PA has delayed signing off on hundreds of such cases over the past few months. No reasons have been given for the delays, al-Qidra added.

Twenty-two patients have died so far this year awaiting permission for treatment outside Gaza, according to health ministry data. Nearly half of them were children.

The true number of deaths is likely higher, however, as the ministry is not aware of all cases.

Three-year-old Yara Ismail Bakhit, who had a heart condition, is among the patients who have died because they have not been able to get a Palestinian Authority transfer out of Gaza.

Patients requiring transfer out of Gaza have to deal with different layers of bureaucracy. Even when patients are referred to hospitals inside Israel, their applications for travel permits go to the Palestinian Authority first.

More than 90 percent of Gaza patients whose files were submitted to the PA in May received no reply, according to Physicians for Human Rights-Israel.

Living in a cemetery

Maysa Ashour is seeking a transfer from Gaza to Jerusalem for her daughter Liyan, who has stomach cancer. After a few months of waiting, Maysa is running out of hope.

“It seems that Liyan will die unless she has her operation,” Maysa said. “We have appealed to everyone but it has been no use.”

Faris Afana, a paramedic, has lost Anas, his 9-year-old son. Anas died earlier this month. He needed surgery for a heart condition. His family, too, was unable to get a permit for treatment outside Gaza.

Despite spending a decade working for Gaza’s health ministry, Faris could not secure the papers needed for his son’s treatment. “I could not save him,” he said.

“We are living in a cemetery,” said Anas’ mother, Inas al-Najjar. “My son was not the first one to die. And unfortunately he will not be the last.”

Via Days of Palestine.