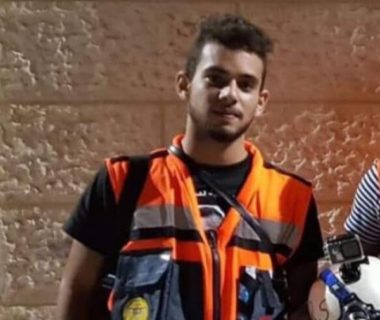 In a new crime of targeting medical personnel, Israeli forces moved into al-Walijah neighborhood in al-Dheisheh refugee camp, south of the West Bank, and killed a volunteer paramedic while treating injured protesters in the camp.

This new crime comes in light of the Israeli government’s escalation in the occupied Palestinian territory (oPt). This crime along with other crimes lately committed by the Israeli forces proves the latter’s intention to inflict more and more victims among the Palestinian civilians.

The Palestinian Center for Human Rights (PCHR) condemns in strongest term this crime and holds the Israeli government fully responsible for the tense situation in the oPt.

PCHR also calls upon the international community to assume its legal and moral obligations and intervene immediately to stop the Israeli forces’ crimes against Palestinians and provide them protection.

According to PCHR’s investigations and eyewitnesses’ statements, at approximately 02:00 on Wednesday, 27 March 2019, Israeli forces moved into al-Dheisheh refugee camp, south of Bethlehem. They raided and searched a house belonging to Mahmoud Waleed al-Lahham (27) and then arrested him. In the meantime, Palestinian young men gathered on the camp’s streets and threw stones and empty bottles at the Israeli soldiers.

As a result, a Palestinian civilian was hit with a live bullet to the foot and then taken to the Arab Society Hospital in Beit Jala for treatment. At approximately 06:00, the Israeli forces moved into al-Walijah neighborhood in the mentioned camp by a civilian vehicle in order to search for the wanted person Jehad Isaa Ma’alieh (21). When the soldiers could not arrest Jehad, they arrested his brother Ma’alieh (27) in order to pressure him to surrender.

As a result, a Palestinian civilian was hit with a live bullet to the shoulder and Saleh Faraj was hit with a live bullet to the hand while present in front of his house in al-Walijah neighborhood. When the Medical Relief Society staff was providing first aid to the wounded civilians, Sajed ‘bed al-Hakeem Mizher (17), a volunteer at the Medical Relief Society, was hit with a bullet to the abdomen while providing first aid to Saleh Faraj. He was then taken to the Arab Society Hospital in Beit Jala, where his health condition was classified as critical. At approximately 08:30, he succumbed to his wounds.

PCHR condemns the killing of paramedic Mizher and stresses that the Israeli forces’ attacks on Palestinian medical personnel while carrying out evacuations and transporting and providing medical assistance for the wounded is a flagrant violation of the rules of international law and international standards, which ensure the protection of medical personnel, including ambulance crews, their vehicles, and medical facilities.

PCHR emphasizes that the Fourth Geneva Convention relative to the Protection of Civilian Persons in Time of War and the Additional Protocols thereto provide special protection for medical personnel and humanitarian relief personnel in Article 14 and Article 24 of the Convention and ensures respect for the principle of freedom of movement for medical personnel, and providing the necessary facilities for carrying out their tasks, which include carrying out evacuations and transporting and providing medical assistance for the wounded and the sick.

In light of the above, PCHR calls upon the international community and the UN bodies to intervene to stop the Israeli escalating crimes and violations and work on providing international protection for Palestinians in the oPt.