Including Children, Army Abducts 17 Palestinians, Injure One, In Hebron 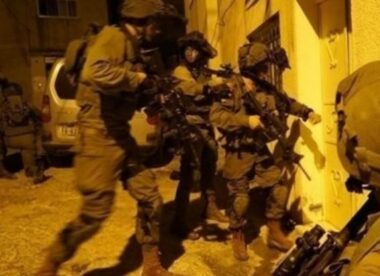 On Thursday dawn, dozens of Israeli soldiers invaded Beit Ummar town, north of Hebron in the southern part of the occupied West Bank, searched and ransacked many homes, abducted sixteen Palestinians, including children and siblings, and injured a former political prisoner. The soldiers also abducted a young man in Hebron city.

They added that the soldiers confiscated clothes and posters of Palestinians killed by the army in previous invasions.

During the violent invasions of homes, the soldiers assaulted a former political prisoner, Hatem Ahmad Sabarna, and abducted his son.

Hatem suffered a leg fracture and various lacerations before Palestinian medics rushed him to a hospital in Hebron.

The abducted Palestinians in Hebron have been identified as: