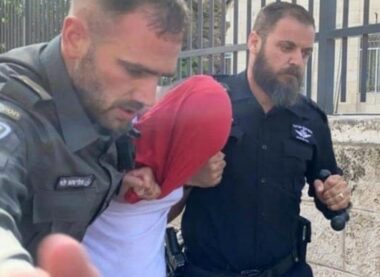 Israeli soldiers abducted, Friday, four Palestinian children and a young man from the courtyards of the Al-Aqsa Mosque compound, and the Old City, in occupied Jerusalem.

Local sources said the soldiers abducted four children, identified as Mohammad Ala’ Obeid, Esmat Obeid, Ahmad Hamza, and Montaser Sabta, near the Dome of the Rock mosque in the Al-Aqsa compound.

The sources added that the soldiers also abducted a young man, identified as Ala’ Somrain, from Silwan town, after stopping him in the Nabi Daoud area, in the Old City.

The abductions took place after the soldiers and police officers imposed severe restrictions on the Palestinians trying to enter Al-Aqsa to perform Friday prayers in the holy site.