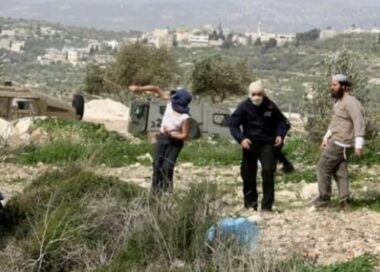 Israeli colonizers, illegally squatting on Palestinian lands, attacked several Palestinians, Friday, wounding one, before the soldiers abducted one shepherd, and took him to a nearby military base.

They added that one shepherd, identified as Sa’id al-Khdeirat, suffered various cuts and lacerations before Palestinian medics rushed him to a hospital in Hebron.

Following the attack, Israeli soldiers invaded the area and abducted one shepherd, identified as Samer al-Khdeirat, 40, who was defending himself when the colonizers assaulted him and the other shepherds.

It is worth mentioning that the Zannouta area is subject to frequent Israeli violations, including the demolition of homes and property, and the uprooting of dozens of trees, especially after Israeli established an “Industrial Zone” in its illegal colonies in the area.