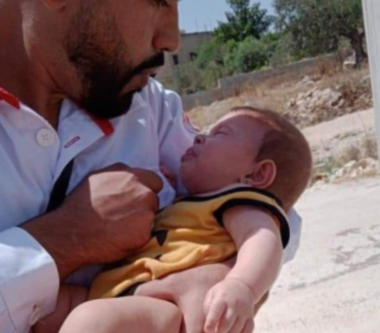 Israeli soldiers attacked, Friday, the weekly procession in Kufur Qaddoum town, east of the northern West Bank city of Qalqilia, and fired gas bombs at random, causing an infant to suffer the effects of teargas inhalation in her family’s home.

The Palestinians marched from the center of the town while chanting for liberation and independence, and calling for ending Israel’s escalating violations before the soldiers attacked them with gas bombs, concussion grenades, and rubber-coated steel bullets.

Some of the Israeli gas bombs struck homes, causing an infant, identified as Nourseen Luay Abdullah, 8 months, to suffer the effects of tear gas inhalation, before the medics rushed her to a local clinic.

Several Palestinians were also injured during the Israeli invasion and attack.

It is worth mentioning that last Saturday, June 5th, the soldiers attacked the weekly procession in Kufur Qaddoum, injuring a Palestinian child and causing dozens more to suffocate due to the effects of teargas inhalation.

The Palestinians in Kufur Qaddoum hold weekly processions against the closure of the village’s main road, which was blockaded by the army 18 years ago to enable easy access to the illegal colonialist settlers while driving to and from Kidumim colony, which was installed on stolen Palestinian lands.

In related news, the soldiers injured dozens of Palestinians in Silwad town, east of the central West Bank city of Ramallah, as they march protesting the constant Israeli violations and demanding the release of the corpse of a young man who was killed by the army last month.