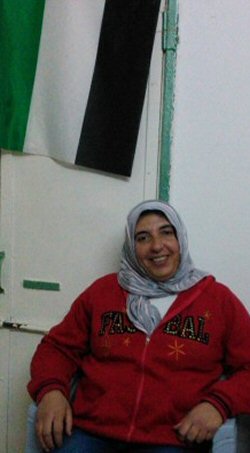 Asira al-Qibliya is a village near Nablus that has been terrorised by the illegal Ytzhar settlement since 1982. In any moment of the day or night, settlers can arrive in the village and make violent incursions against the people or damage their property, including cars and houses. The people of Asira al-Qibliya live in complete insecurity and fear for their physical safety daily.

This is the story of Hakima Motlaq, a human rights activist and a tireless advocate for the empowerment of the women and children in the village. Here, she tells Mariana about a recent attack on the village’s inhabitants by soldiers and settlers.

“On 25th August at 4pm, soldiers came and put up two flying checkpoints, preventing any access to Asira and the nearby village of Urif that borders Asira. Then, accompanied by a group of settlers, the soldiers assaulted 10 workers in the big Asira quarry.

First, the workers were detained and forced by the soldiers to stand with their arms held up for half an hour. After this, the soldiers searched them and then assaulted them by kicking them in the legs and then hitting their bodies with their guns. Not satisfied, the soldiers forced them to lie down and started to walk on them. This torture lasted an hour and a half.

After this time, they handcuffed the workers with plastic handcuffs and started asking hem where they were hiding their weapons. Not receiving any satisfactory answers, they searched throughout the quarry, but not finding anything, they finally freed the workers and removed the checkpoints.

Me and the mothers, wives and children of the workers lived terrible moments during this time and feared the worst, because for two hours we couldn’t contact them or reach the place. Fortunately, no one was seriously injured.

Only a week ago, in the same quarry, the settlers came one night and destroyed a new GBC excavator, setting it on fire.” 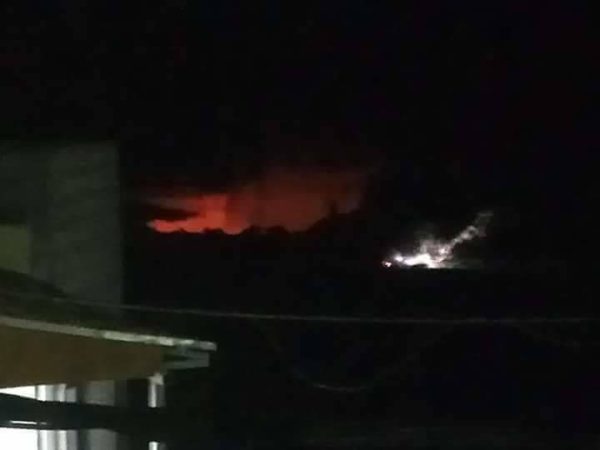 The excavator fire seen from Asira-village 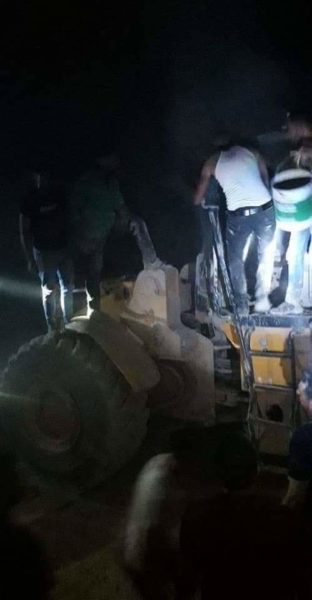 The excavator destroyed by the fire

For background information on the village of Asira al-Qibliya, read this expert from a previous interview with Hakima.

“Asira is a very old village with Roman ruins. So it dates back to the Roman age with a lot of evidence of the Ottomans being here as well. Some of the Roman ruins lie in the west of the village. The village lies 14 Km south of Nablus and is 6,440 dunams in its size. The population is 3,200. But 50% of the population are refugees of the 1948 war, mostly coming from Haifa.

The main problem we face is the occupation and the settlements. In the beginning, the settlement had only 18 dunams of land that had once belonged to Asira. But now they have 1,800 dunams of land taken from 6 villages, including Asira, but also Burin, Madama, Huwwara, Urif and Einabus. But also they come to the villages up to 3 times a week at the moment. They burn cars, burn trees, burn crops. So we’ve had to stop planting crops nearby to the settlement as they always come and destroy whatever we plant.

When they come at night they are also causing a big problem for the children in particular. The children suffer from insomnia, bed wetting and their performance at school is worse all due to the psychological effects of this constant fear. Even when they play you can see it. They are always playing violent games like “settler and Palestinian” where they hurt each other. This is their favourite game and they pretend to shoot each other and all the parents are scared for their children and the psychological damage that is being done to them.

But even worse than this in recent times rather than just coming and throwing stones settlers have come with guns. Last year a man was shot in the head. We have a video of this incident. [Yizhar is considered the most violent settlement in the West Bank due to the number of reported incidents coming from there.]“

Interview 07/24/18: Awni Farhat and Youssef Sammour — Palestinians Will Not Be Free Until They Can Return to Their Homeland