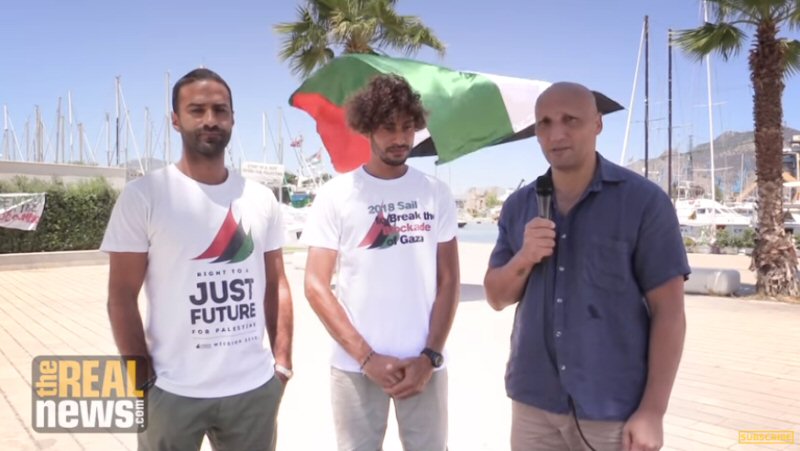 DIMITRI LASCARIS: This is Dimitri Lascaris, reporting from the port in Palermo, Sicily, from the Freedom Flotilla.

I’m joined here today by two third-generation Palestinian refugees who have been passengers on the Freedom Flotilla. Immediately to my right is Awni Farhat, who is from Gaza. He left recently and has since been studying in The Hague in the Netherlands. And he’s a researcher as well as a human rights activist. And to Awni’s left is Youssef Sammour, who is from Dubai and has a degree in engineering from the University of Auckland in New Zealand. Thank you very much for joining us today.

So I’d like to start with you, Awni. Could you tell us a little bit about how you ended up outside of the Gaza Strip and studying in the Hague in the Netherlands?

AWNI FARHAT: Actually, before we start talking about my personal story, there are thousands of thousands of Palestinians who then they are still stuck in the Gaza Strip because of the Israeli blockade, because of this continuing injustice. There’s, basically there’s no freedom of movement in the Gaza Strip. You can’t easily get in and get out. But in 2015 I managed after seven months of, like, trying and trying to, to go out to do further studies. I was lucky. In 2015 I left Egypt, and from Egypt to Istanbul. And then after living one year in Istanbul I moved to the Netherlands to do my masters in the Hague.

DIMITRI LASCARIS: And Youssef, your parents, as I understand it, left Palestine at a very early stage in life in 1948. Could you tell us about that experience?

YOUSSEF SAMMOUR: Yes. So my father was actually born on May 15, 1948. And obviously that was the time that all the Palestinians were exiled from their homeland. My parents went to Lebanon, or my grandparents did. My father was actually born on the trail. My grandma, his mother, went into labor while they were moving around. And she was so traumatized that she couldn’t rear him. So what they used to do was find almonds from a tree and grind them up and get almond milk, and that’s how my father was reared for a couple of weeks until they got to Lebanon.

DIMITRI LASCARIS: And you’ve never been back to Palestine, have you.

YOUSSEF SAMMOUR: We have no family left in Palestine. I’ve never attempted to go, even though I’ve been wanting to for many years. My parents always convinced me not to, because they say why would you? It’s too dangerous. But I have been to Lebanon recently, and I visited the refugee camp where my parents grew up. It’s about half an hour from Beirut by car. We still have family there, and it was really a great experience. But hopefully I’ll, I want to go visit Palestine. I do want to visit my, my parents’ homeland. I have the New Zealand passport, I consider myself a kiwi, having lived there for 15 years. So hopefully that will be enough incentive for the Israelis to let me through.

DIMITRI LASCARIS: And Awni, I’d like to ask both of you, actually. I’ll start with you. What do you think that this voyage, this expedition, means to the Palestinian people? Understanding the reality that the vessels are likely to be intercepted in international waters and are not likely to be permitted to actually reach Gaza, why do you think this is nonetheless an important expedition for the Palestinian people?

AWNI FARHAT: Actually, we should, we should-. Our priority is to keep thinking about the Palestinians in the Gaza Strip. The Palestinians, they are locked inside this small place. They don’t have basic human rights. And like here, this side of the world, we have so much privilege. Me as a Palestinian living in the diaspora, I can’t, I can’t overcome this feeling of helplessness. I can’t live my normal life and step back and just turn, turn my back about what’s happening in Palestine, and in the Gaza Strip, especially, where I lived most of my life. Where I have my family and my friends, my social organic network.

DIMITRI LASCARIS: And Youssef, you know, both of you have been on this voyage for quite some time. I think pretty much from the beginning, or close to it. You’ve had the opportunity to enter a number of European ports. You’ve seen, you’ve gained, I gather, a very good sense of the level of grassroots support throughout Europe for the Palestinian cause. But when you compare what you’ve experienced on the ground to the policies of EU governments, there appears to be a disparity, a vast disparity.

YOUSSEF SAMMOUR: It’s a bit of a difficult question, because I’m not a huge politician, or I’m not into politics that much, especially in the EU politics. But I do know that there are many issues in the EU that the grassroots movements are trying to enforce or promote. And the higher-up people aren’t hearing any of it. So this is just one of the many issues.

We have seen a lot of progress in the, especially in Spain. So while we were in Gijon, in North Spain, that same time, Valencia boycotted Israel officially. Valencia is the third-biggest city in Spain. And I think 40 or 50 other provinces did the same and the same time. And in Gijon, they passed a resolution to completely boycott Israel or any products from Israel, and promote it up, higher up within the EU. We met the mayors and they were supporting it as well, and they showed us the paperwork and all that good stuff. So that was very encouraging. So I do think it is, there is potential for it. It just needs more and more attention.

DIMITRI LASCARIS: And I understand also that in Italy there are at least four cities that are now calling for an arms embargo on Israel, which would be a quite dramatic move. And there was the adoption recently by the Irish Senate of a bill banning the importation of settlement products. You know, Awni, you’ve actually lived in the EU. You’re currently a resident in the Netherlands. Do you have a view about why there is this disparity between grassroots support on the policies of the national governments towards Israel and Palestine?

AWNI FARHAT: Sadly, the international community, like, like here in Europe they are considering this issue is a sensitive issue. And it has its historical background, and it’s, it’s-. But we have, we have met so many politicians, and we had political debates with representatives of political parties. And some of them they don’t have explicit or clear standpoint or opinion about, about the Palestinian-Israeli question. And it’s a bit frustrating.

DIMITRI LASCARIS: So you believe it’s an educational process that you have to go.

AWNI FARHAT: Yeah. It’s, it’s happening, and you can see it clearly in the streets of Gijon, the streets of Amsterdam. There’s a shift of the way, how people they think about, about this, And through education, through lobby and advocacy, through what we’re doing now with the Freedom Flotilla, we are floating hope. We are sailing from one country to another, sharing the voice of Palestinians, sharing the message of Palestinians, standing in solidarity with the Palestinians and sharing a message for humanity. Because this is the basic thing. We are standing for human rights and social justice; not just for Palestinians, but for everyone.

DIMITRI LASCARIS: Well, I can tell you it’s been a privilege sailing with you on the Freedom Flotilla. And I’d like to thank you both very much for speaking to The Real News today.

YOUSSEF SAMMOUR: Yes, thank you. Can I say one more thing, though? The local groups have been super supportive, and it’s been great. But in some of the ports they’ve raised some local, you could say, political flags along with us. I guess they’re fans of some kind of political movements there. I just want to reiterate this is not a political movement at all. Our ship to Gaza is, in essence, in purest form, it’s a human rights movement. We’re not taking donations from any political parties. We are just trying to help humans get a better life. And that’s all it is.

DIMITRI LASCARIS: Thank you again very much for speaking to The Real News. This is Dimitri Lascaris, reporting from Palermo, Sicily for The Real News Network.