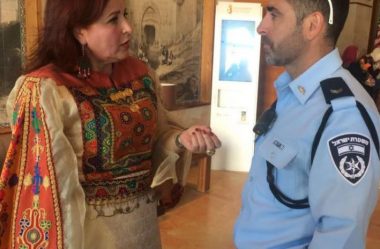 On Wednesday, Israeli soldiers and police officers banned two activities, that were planned in celebration of March 8th, the International Woman’s Day, in occupied East Jerusalem, after claiming the two were sponsored by the Palestinian Authority.

The decision to ban the two activities was made by Israeli ‘Internal Security Minister” Gilad Erdan, who said Israel will not allow any activities organized or sponsored by the Palestinian Authority, in Jerusalem.

They were planned and organized by Women for Life Society, and Al-Mortaqa for Women Society.

Many police officers and soldiers invaded halls in Saint George Hotel, and the Al-Hamra Palace, and handed the organizers official orders by Erdan, who quoted a law that was passed by the Knesset in 1994.