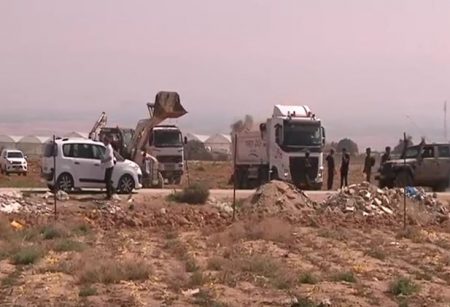 Journalist Adel AbuNemah, reported to the PNN that the land was razed and the trees were uprooted, even though it is located in area B and not C,¬†as Israel claims.

The land is private property of¬†farmer Mohammed Awajneh, who said that his land was among other agricultural lands razed by Israeli bulldozers without prior notice.

The trees were planted two years ago.

According to the Palestine Information Center (PIC), around 150,000 Palestinian citizens live in 542 residential communities located partially or completely within Area C, while 325,000 Israeli settlers live in the same area in 135 settlements and about 100 outposts, in violation of the international law.

70% of the lands of Area C are located within the boundaries of the local councils of the Israeli settlements; therefore, Palestinians are prohibited from using or developing them.