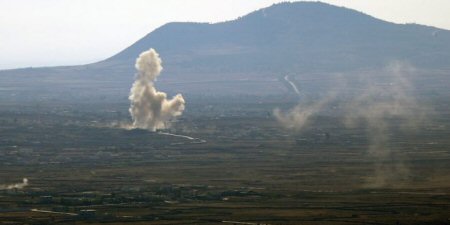 Israel struck three Syrian artillery cannons on Saturday, in response to alleged shelling. According to the Israeli military, five projectiles entered the northern occupied Golan region, coming from Syria. However, the location of only four rockets was identified. The rockets landed in open areas, with no injuries or damage.

Israeli forces said, according to the PNN, that despite the fact the rockets that landed were spillover from the country’s civil war, the amount of rocket fire necessitated a sharp Israeli response.

A military spokesmen said, in a statement, that  it “will not tolerate any attempt to harm the sovereignty of the State of Israel and the security of its residents, and views the Syrian regime as responsible for what is happening in its territory,”

On Thursday, Israeli forces struck targets in Syria, in response to firing in the occupied Golan Heights. A projectile had  fallen, earlier, into an open area of the northern Golan Heights, causing no injuries or damage.

Two rocket-alert sirens sounded in the Golan, on Wednesday.

Israeli PM Netanyahu said, after the strike, that Israel will not tolerate spillover from Syria.

This is the second time Israel has bombed Syria in a week. On Monday, the Israeli air force attacked an anti-aircraft battery east of Damascus after it fired a missile they claim that it was targeting Israel Air Force planes.

The Syrian military warned of “dangerous consequences” following the strike, and claimed that they had successfully hit an Israeli jet.