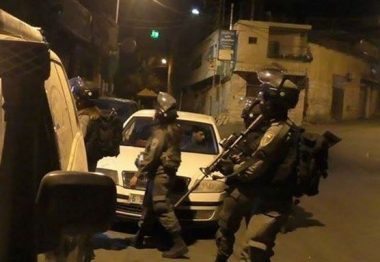 The Palestinian Prisoner’s Society (PPS) has reported that Israeli soldiers have abducted, on Sunday at dawn, at least six Palestinians in the West Bank governorates of Qalqilia, Nablus and Bethlehem.

The Qalqilia office of the PPS, in northern West Bank, said the soldiers invaded several homes in various parts of the governorate, and abducted two children, identified as Mahmoud Yousef Freij, 15, and Hammoud Bilal Mansour, 14.

In Nablus, also in northern West Bank, the PPS said the soldiers searched many homes, and abducted Sultan al-Meenawi and Awad Abu Salha.

The soldiers also closed the main gate at the entrance of the al-Fawwar refugee camp, south of Hebron, in the southern part of the West Bank, and prevented the Palestinians from entering or leaving it.

The closure also obstructed the work of Palestinian sanitization specialists who are trying to resolve water pollution issues in the refugee camp.