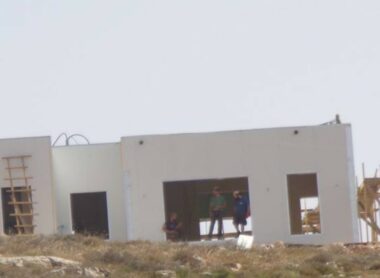 Illegal Israeli colonizers have escalated the expansion of an illegal outpost they installed on stolen Palestinian lands, in Jaloud village, south of the northern West Bank city of Nablus.

Ghassan Daghlas, a Palestinian official who monitors Israel’s illegal colonialist activities in northern West Bank, said the colonizers have built, in the past several weeks, hundreds of new units in the illegal Kida outpost.

Daghlas also said that, in the year 2016, the Israeli High Court, issued a ruling preventing the expansion of the outpost and the illegal annexation of the Palestinian lands.

Despite the ruling, the colonizers, who enjoy the protection of the Israeli army, continued to work on expanding the outpost by building more homes in addition to bulldozing and uprooting the Palestinian lands.