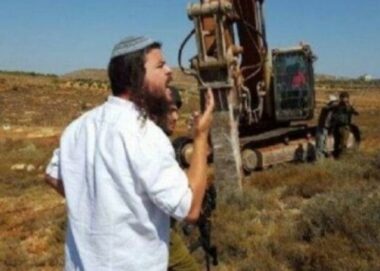 Several illegal Israeli colonizers invaded, on Sunday evening, Palestinian farmlands in the Khirbat al-Hadidiya area in the Northern Plains of the occupied West Bank, and bulldozed them in preparation for occupying them.

Human Rights activist Aref Daraghma stated that the colonizers brought bulldozers and started uprooting the lands, in the northern part of Khirbat al-Hadidiya.

Daraghma added that the colonizers have recently escalated their violations against the Palestinians and their lands.

He also said that the colonizers recently bulldozed farmlands in a nearby meadow and started marking them down in preparation for occupying them.