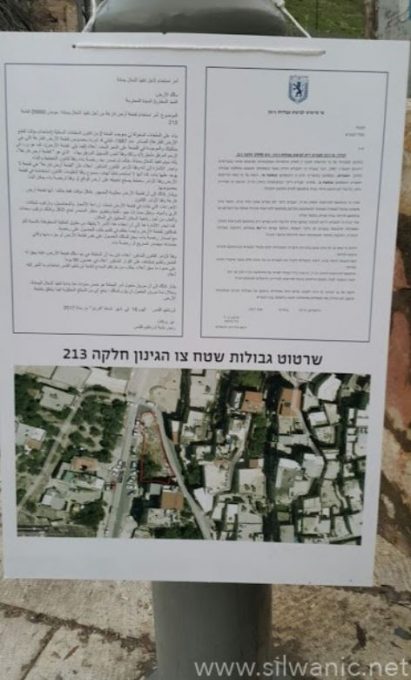 The Jerusalem City Council has decided to take over and confiscate a privately-owned Palestinian land in the al-Ein Street in Silwan town, in occupied East Jerusalem, to turn it into a “public usage property.”

The Wadi Hilweh Information Center in Silwan (Silwanic) has reported that the soldiers and City Council employees, invaded the town, and posted a sign with maps in Arabic and Hebrew, stating that the “vacant land will be used for gardening, and a playground.”

Silwanic added that the land in question is 300 Square/meters, owned by Palestinians from Ghozlan family in Silwan, and that the land was first designated by the City Council as a “Green Area,” before it was illegally confiscated.

The order to take over the land is valid for five years, based on a law authoring the city to “temporarily use vacant lands.” The City Council intends to install irrigation systems, a garden and a play area. Mohammad Ghozlan, one of the owners, said he will submit an appeal against the confiscation of the family’s land, as the law allows the residents to file appeals within the first 90 days.

“Even if the claim is true about using our land for recreation for the residents of the area, such as playgrounds and slides, we are the owners, and we are the ones who will plant it and establish this garden and recreation area,” Mohammad stated, “This is our land, not a land owned by the City Council or the state; we are the rightful, legal owners.” It is worth mentioning that Silwan is just south of the Al-Aqsa Mosque, in occupied East Jerusalem, and is considered one of the biggest and oldest Palestinian towns, and the closest to Al-Aqsa, and is subject to frequent Israeli violations, including ongoing illegal confiscation of lands and property to be used by Israeli colonizers.