Israel Continues The Bulldozing Of Palestinian Lands In Silwan 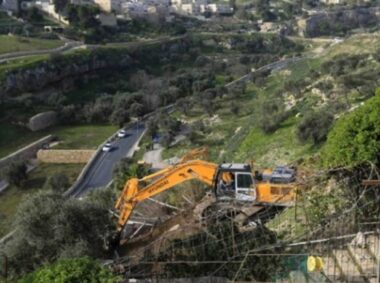 The Israeli authorities in the occupied capital, Jerusalem, in the West Bank, are ongoing the bulldozing of Palestinian lands in the Wad Ar-Rababa neighborhood in Silwan town, south of the Al-Aqsa Mosque.

The army has been bulldozing and uprooting the illegally annexed Palestinian lands, in addition to assaulting the locals and forcing them away while uprooting dozens of their trees.

The City Council in occupied Jerusalem is building the infrastructure for a cablecar in Wadi Ar-Rababa, in addition to a “tourist center,” “Talmudic garden,” and other structures meant for pumping the water from springs and wells in Silwan.

The authorities and colonialist groups have already placed more than fifty fake graves in the northern part of Silwan and alleged that the area was once a cemetery for Jews.

WAFA added that the national or Talmudic gardens and the fake graces in several parts of occupied Jerusalem currently occupy more than 500 Dunams of Palestinian lands.

The placing of fake gravestones started in the Salodha area and the Al-Wista neighborhood in Silwan in 1978, only meters away from Palestinian homes, and extended to Wadi Ar-Rababa.

WAFA said the occupation authorities laced more than 12.800 fake graves in lands surrounding the Al-Aqsa Mosque, %32 of them are in Silwan, south of Al-Aqsa, including 935 in Wadi Ar-Rababa; fifty of these graves have recently been placed there.