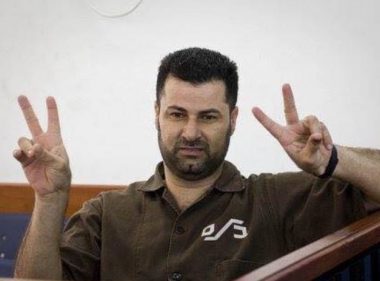 The Ofer Israeli military court, near Ramallah in central West Bank, has delayed the deliberations of the case against senior nonviolent activist, the head of the “Colonization and Wall Resistance Commission,” Abdullah Abu Rahma.

Abu Rahma was abducted last Sunday at dawn, along with Ahmad Abu Rahma, 16, after the soldiers invaded Bil’in village, near the central West Bank city of Ramallah, and stormed their homes.

The Commission strongly denounced the abduction and imprisonment of Abu Rahma, said that this was part of Israel’s illegal targeting of nonviolent activists, and demanded his immediate and unconditional release.

It is worth mentioning that six Israeli army jeeps invaded Bil’in, approximately a 12:30 after midnight, November 22, 2017, fired many gas bombs at random, and withdrew an hour later.

In related news, nonviolent activist Ashraf Abu Rahma, who was abducted by the soldiers a month ago, was sentenced by Ofer military court for two additional months, in addition to 5000 Shekels fines, and 18 months suspended sentence.

Photojournalist Haitham Khatib said that Ashraf has been threatened with five additional five years of imprisonment, if he attends the peaceful processions in the village.

Khatib said the army is alleging that Ashraf also “hurled stones at the soldiers,” but confirmed that he and Ashraf marched together. He affirmed Ashraf did not throw stones or resort to any form of violence.

“He is a peaceful activist like me! Israel are trying to destroy my village’s peaceful demonstrations!” Haitham added.