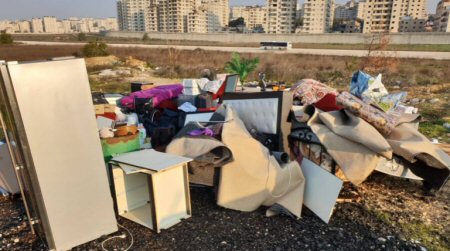 On Wednesday, January 2, 2018, Israeli forces demolished a Palestinian-owned home in the Jerusalem district.

The house belonged to the Maghrabi family. It was built five years ago in al-Matar area of the Qalandia neighborhood on the Jerusalem side of the Israeli wall that surrounds the West Bank. Six members of the Shweiki family lived in the home, reports al-Jazeera. Following the demolition, residents’ belongings were left stacked outside next to the rubble of what used to be their home.

Israeli authorities claim that the house lacks construction permits. According to the Wadi Hilweh Information Center, the owner of the house Hamza al-Mughrabi has attempting licensing his house under Israeli law for years.

Demolition reported in Qalandia, January 2, 2018. Photo credit: The United Nations Office for the Coordination of Humanitarian Affairs in the occupied Palestinian territories.