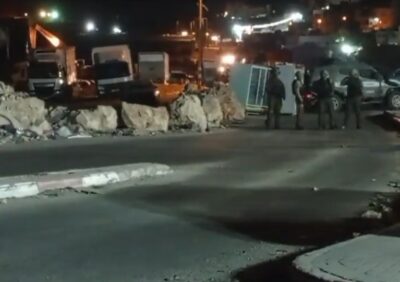 Israeli soldiers and members of the “City Council” of Jerusalem, invaded the area near the Qalandia terminal, north of the occupied Palestinian capital, Jerusalem, and south of Ramallah, in the West Bank, before demolishing several commercial structures and a fuel station.

Eyewitnesses said the soldiers surrounded the entire area before invading it, and demolished nearly 30 structures.

They added that one of the structures was a fruits and vegetables shop, owned by members of the Jaber family, in addition to a small gas station, and a carwash facility. Israel intends to demolish the Palestinian structures in that area as part of the ongoing work to expand Qalandia Terminal, and to prepare for a tunnel road that would link between colonialist roads #60 and #443 by illegally annexing Palestinian lands.

Israel’s colonies and the segregated roads leading to them across the occupied West Bank, including occupied East Jerusalem are illegal under International Law, various United Nations resolutions and the Fourth Geneva Convention to which Israel is a signatory and a constant violator. They also constitute war crimes under International Humanitarian Law.