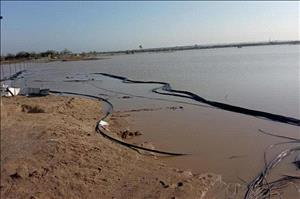 The Israeli army opened, Saturday, the dams that collect rainfall across the besieged Gaza Strip, flooding more than 1000 dunams of Palestinian farmlands.

Media sources said the soldiers opened the dams, located across the fence east of the Sheja’eyya neighborhood, east of Gaza city.

They added that this resulted in flooding more than 1000 dunams, planted with Wheat, Barley, Peas, Cabbages, and cauliflower.

The incident was the second since last week when the soldiers opened the dams and flooded hundreds of Dunams of Palestinian farmlands, east of Gaza Strip.

While the Palestinians continue to suffer serious shortages in water supplies, Israel has many water reservoirs across the perimeter fence, and collects the rainfall while at the same time preventing the Palestinians in the coastal region from collecting the water to fill their wells and irrigate their lands.