Army Starts The Demolition Of Stores In Shu’fat Refugee Camp 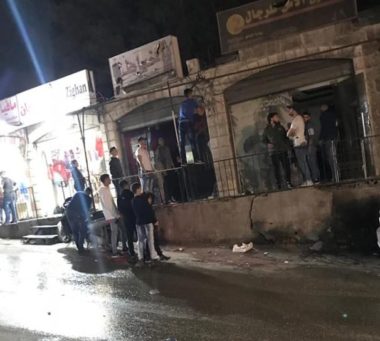 Israeli soldiers and police officers started, on Wednesday morning, the demolition of many stores in Shu’fat refugee camp, north of occupied East Jerusalem.

Nasser Fasfous, the spokesperson of Fateh Movement in Shu’fat, said dozens of soldiers, officers and employees of the City Council in occupied Jerusalem, stormed the refugee camp, and initiated the demolition of the stores.

He added that the stores include a bakery, clothing shops, shoe stores, shops and restaurants, were built in 2007, and City Council in occupied Jerusalem is claiming they did not receive construction permits.

It is worth mentioning that the army only posted the demolition orders, on Tuesday evening, after invading the refugee camp.

Dozens of soldiers, undercover forces and members of “City Council” in occupied Jerusalem, invaded the refugee camp, and handed the orders, informing the Palestinians that they have twelve hours to carry out the demolitions.

Store owners said their shops were built more than ten years ago, and added that Israel is targeting the only source of livelihood to them and their families.

Dozens of Palestinians protested the invasion into the refugee camp, while the soldiers fired gas bombs, rubber-coated steel bullets and concussion grenades.

The demolition of homes and property is an illegal act of collective punishment. This is in addition to the fact that refugee camps are supposed to be under United Nations supervision and administration; therefore, attacks against them do not only target the civilians, who are supposed to be protected under International Law, but also against the UN itself and the refugee camps it serves.