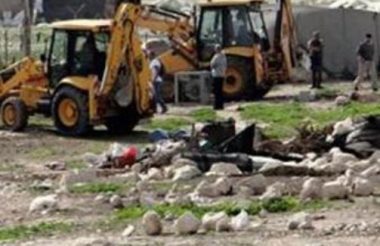 Local sources said the soldiers granted the families 72 hours to file appeals against the demolitions.

They added that the army claimed the community is located by the main road leading to Anatot military base, and that the Palestinians are not allowed to build, or reside, in that area.

The Bedouin families have been living in the area for the past fifty years, and have been subject to constant Israeli violations and destruction.

In addition, the soldiers abducted two young Palestinian men, in Silwan town, south of the Al-Aqsa Mosque, in occupied East Jerusalem. Dozens of soldiers have been deployed near Al-Aqsa and around the Old City.

Furthermore, the soldiers invaded Beit Fajjar town, south of Bethlehem, and clashed with many local youths, before shooting a young man.

Also at dawn, the soldiers invaded Qalandia refugee camp, north of occupied Jerusalem, searched homes and clashed with local youngsters, before shooting one and abducting another.