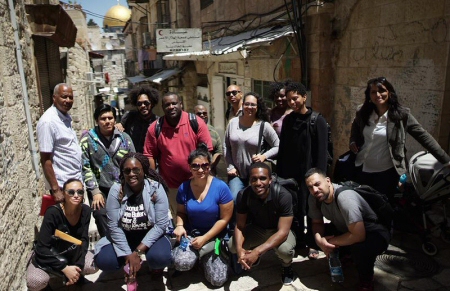 08/24/16 Rhania Khalek (Photo: Florida Senator Dwight Bullard has faced onslaught from pro-Israel groups for joining this Dream Defenders delegation to Palestine in May — via Instagram.)

Dwight Bullard, a progressive African American state senator representing Florida’s 39th district, is under attack from Israel lobby groups for visiting the Israeli-occupied West Bank in May on a delegation hosted by the Dream Defenders, a group that supports the Palestinian-led boycott, divestment and sanctions (BDS) movement.

Unbowed, Bullard has told The Electronic Intifada that he witnessed “segregation and injustice” in Palestine.

Leading the attack against Bullard is the pro-Israel group Miami United Against BDS.

In a press release last week, it accused Bullard of meeting with “terrorists.”

“Bullard took a trip in May to territories under Palestinian control where he met with the Popular Front for the Liberation of Palestine (PFLP), an organization listed by the State Department since 1997 as a foreign terrorist organization,” the group stated.

The US and Israel consider virtually all Palestinian political factions and resistance organizations to be “terrorist” groups.