IMEMC Report: The Plight of Africa’s Exiles in Israel 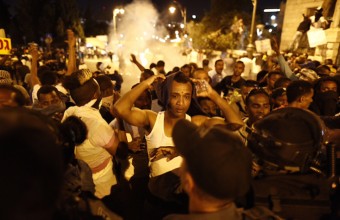 Hundreds of Ethiopian Jews protested Thursday evening [April 30, 2015], near Israeli Prime Minister Benjamin Netanyahu‘s residence in Jerusalem, against racism, discrimination and continuous violence suffered at the hands of Israeli police.The ongoing anger of the Falasha (exiles in Ethiopia’s Amharic language) against police racism bottlenecked in Jerusalem, yesterday, when several hundred Ethiopian Jews, gathered in the French Square, clashed with police riot teams. ‘Our blood is only good for wars,’ chanted the demonstrators, as they arrived in Jerusalem from all parts of the self-proclaimed Jewish State.

According to the Palestinian News Network (PNN), the official police version of Thursday’s events relates that demonstrators threw stones at the officers, injuring four. In order to ‘calm the situation’, Jerusalem mayor Nir Barkat was prompted to intervene. At least 15 young demonstrators were injured.

The demonstration was prompted by a video of an incident which occured on Sunday, in the Tel Aviv suburb of Holon, in which a policeman was seen to be pushing an Israeli soldier of Ethiopian descent (Demas Fekadeh) to the ground, after he didn’t initially move at the policeman’s request, Haaretz has reported.
Police were allegedly attempting to clear the area due to a suspicious object. Another policeman was then shown in the video pummeling Fekadeh.

Thursday’s procession had left the area of central police command and was, then, directed towards the residence of PM Netanyahu, in the Jewish area of ​​Jerusalem, tailed by a large deployment of police forces. Tensions immediately rose and, at some point, police threw stun grenades to deter the protesters, mostly consisting of angry youth. Moments of tension followed when the police did not hesitate to employ their usual tactic of exerting unnecessary and brutal force in quelling similar protests.

The Falasha delegation also confronted Israeli president Reuven Rivlin, in protest of the ongoing discrimination against Ethiopian Jewish migrants in Israel, strongly denouncing the attack on Fekadeh, who was severely beaten by police, a fact which remains unisolated, they stressed.

Ethiopian Jews continue to remain at the lower rungs of the social ladder in Israel, PNN further reports. In the past, they have complained, often with demonstrations marked by violent clashes, the discrimination suffered in tandem with their heavy economic condition.

Haaretz reported on January 27, 2013, that an Israeli government official had, for the first time, acknowledged the state practice of injecting women of Ethiopian origin with the long-acting contraceptive Depo-Provera.

Ethiopian Jews claim their heritage as the fruit of the union between King Solomon and the Queen of Sheba:

Threatened by the Ethiopian government from 1977-1979, the Falasha emigrated to the Sudan. The Israeli government then decided to carry them in their own territory with an airlift, in three operations called Operation Moses, Operation Joshua and Operation Solomon.

However, Israeli racism against African migrants is well documented.

Furthermore, on an international level, when tweets offering advice to demonstrators in Ferguson (Missouri, USA) emerged from Palestine, along with reports of Ferguson police having been trained by Israelis, the equation that Ferguson was Gaza became a headline topic in conjunction with police violence in the United States, as the African-American publication Salon has recently suggested.

Currently, there are about 120 thousand Ethiopian Jews in Israel who continue to have difficulty adjusting to an environment very different from that of their origin. The integration and acceptance of young people takes place in schools and especially from recruitment efforts by Israeli forces. Authorities are accused of having implemented a policy of drastic Judaization of the Ethiopians according to the Israeli canons, ignoring their language and culture.