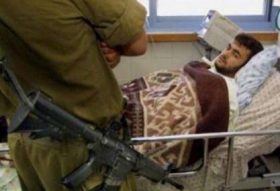 The Israeli Salem military court ordered a paralyzed Palestinian detainee under detention for 72 additional hours, and is considering imprisoning him under Administrative Detention, without charges.

The Palestinian Prisoners’ Society (PPS) said that the detainee, Kheirallah Shareeda, was sent to court in an ambulance, despite health conditions he is facing.

The PPS added that the detainee was “subjected to a mock trial,” as he will likely be held under arbitrary Administrative Detention orders, without charges.

The court remanded him for 72 additional days, until determining whether the prosecution intends to indict him, or hold him under an Administrative Detention order.

Shareeda, from the northern West Bank district of Nablus, was kidnapped on May 21.