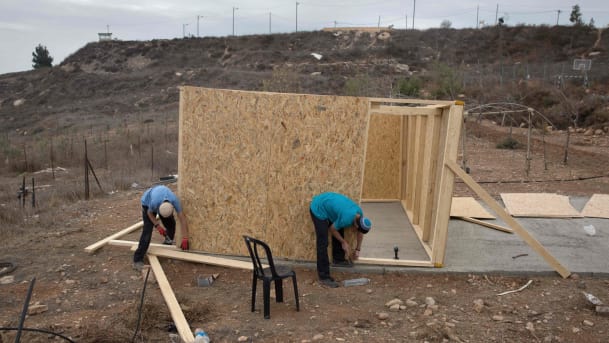 The land on which the colony was constructed was stolen from Palestinian landowners in the villages of Turmusayya, Mughayyir, Jalud and Qaryut. The area in question is about 205 dunams of land, located north of Ramallah, and south of Nablus, in the north-central part of the West Bank.

In its recognition of the outpost on Wednesday, in the midst of a bombing campaign on Gaza, Israeli authorities explicitly recognized the legitimacy of a colony that was constructed in violation of Israeli law.

According to Israeli sources, the aim of the legitimization of the outpost of Adei Ad is to expand the existing settlement of Amichai, which is located deep within Palestinian Territory in the West Bank, and was itself constructed on stolen Palestinian land.

The idea, according to the Israeli sources, is to vastly expand the Israeli settlement presence in the central West Bank, in order to expand the state of Israel further onto Palestinian land.

Since its creation in 1948, the state of Israel has never officially declared its borders, and has used military and paramilitary force to continually expand its land base onto what had been Palestinian land.

The large settlement of Amichai was initially constructed to transfer Israeli colonists who were moved from the illegal outpost of Amona. Since that time, the colonists, made up of paramilitary forces and their families, have expanded the land base of their colony onto stolen Palestinian land. In addition, the settler-only roads leading from inside Israel to the settlement colony discriminate against Palestinians and do not allow them to drive on the roads, or even to cross the roads to reach their land.

Adei Ad was constructed a year ago, several kilometers east of Amichai, without licenses or permits from the Israeli government. But Israeli policy allows for colonies to be recognized and receive services from the Israeli government, including water, electricity and sewage services, once they establish themselves illegally on stolen Palestinian land and remain in place for a certain period – despite the fact that they were initially created in violation of Israeli law.

The recognition of the colony of Adei Ad comes despite the fact that there is an active appeal process in the Israeli court system, filed by the Palestinian landowners whose land was confiscated by the Israeli military and then turned over to paramilitary forces for the construction of the colony.

According to an expose’ of the Adei Ad settlement colony by the Israeli human rights group Yesh Din, “Yesh Din has documented 96 offenses committed by Israeli civilians against Palestinians in the area of the outpost since its establishment. These offenses include: violence, land seizure and property offenses.”

The full report by Yesh Din about the Adei Ad settlement can be found here.