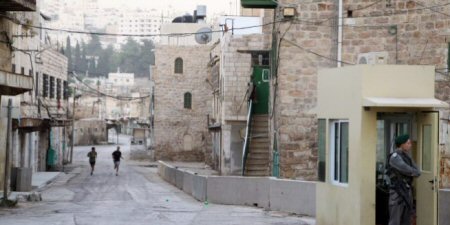 Israeli authorities imposed a ban on renovations of a kindergarten in the southern Occupied West Bank city of Hebron, according to Hebron’s Rehabilitation Committee

No justification was provided by Israel, for the ‘stop work order’ on the school building belonging to Palestinian Red Crescent Society.

The Palestinian Red Crescent Society is a humanitarian organization that, according to its website, provides “health and social services to the Palestinian people when and where needed.”

The Kindergarten building is located near the Ibrahimi Mosque (The Cave of the Patriarchs), in the central part of the city of Hebron.

In 1994, following an attack on Muslim worshipers at the Ibrahimi Mosque by American-Israeli doctor Baruch Goldstein, in which he killed 27 men, women and children, Israeli authorities took over the mosque and split it in half, making half of it into a synagogue.

Following the Oslo Accords, Israeli authorities put the central city of  Al Khalil (Hebron), under full Israeli control – kicking out most of the Palestinian residents from their ancestral homes, and allowing hostile, armed right-wing Israeli settler militia groups to set up bases in what had been Palestinian homes.

The 1997 Hebron Agreement/Protocol was an agreement between Israel, represented by Benjamin Netanyahu, and the Palestinian Liberation Organization, represented by Yasser Arafat, was supposed to end Israeli military control over 80% (H1 ), with 20% (H2- the central city of Hebron) of Al-Khalil remaining under full Israeli control. However, the Israeli military never adhered to this agreement, and never turned over the control of the city of Hebron to its Palestinian leadership – instead taking more land and expanding the control of right-wing Israeli settlers.