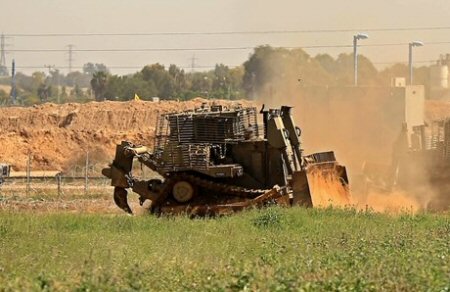 The Israeli army, on Wednesday, began to bulldoze Palestinian land in Beit Ummar town, north of the southern occupied West Bank city of Hebron, in order to make way for the construction of a settler-only bypass road.

WAFA correspondent reported that Israeli bulldozers, under military protection, proceeded to raze about 400 dunams of Palestinian land belonging to the Hebron-district towns of Halhul and Beit Ummar to make room for the settler-only bypass road.

The road is planned to extend several kilometres on private Palestinian fertile lands from the Gush Etzion settlement junction, north of Hebron, to the Nabi Younes junction, at the eastern entrance of Halhul town, passing through Beit Al Baraka church compound, opposite to al-Arroub refugee camp, and Jabal al-Qarn natural reserve.

Over the last two decades, Jewish-only settlements have expanded rapidly across the occupied West Bank, severely hindering the possibility of a contiguous Palestinian state.

The Israeli government provides roads, electricity, water, and sewage systems to over 600,000 illegal settlers in the West Bank, while the same services remain inaccessible to most of the neighbouring Palestinians.

While the international community has been vocal in its condemnation of Israeli settlement activity, it has taken few steps to pressure Israel into ceasing the enterprise.