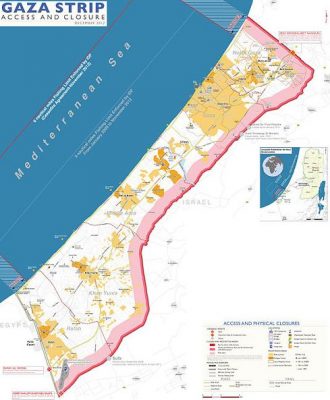 The Israeli Authorities have decided, on Monday evening, to close Karem Abu Salem (Kerem Shalom) crossing, and to reduce the fishing zone allotted for the Palestinians in Gaza, from six to only three nautical miles.

Fattouh added that Israel cited “security considerations” for shutting the crossing down, and said that only limited types of food supply, and medicine, will be allowed through.

The decision came only one week after Israel decided to significantly decrease the amount of goods, food and medicine entering the Gaza Strip, as one of the measures meant to pressure the Palestinians into halting the Great Return March processions.

The decision includes decreasing the fishing zone to the fishermen in Gaza from six to three nautical miles, also until further notice, and for the same “reasons.”

There are more than 4000 fishers and around 700 boats in the Gaza Strip providing livelihood to dozens of at least 70.000 Palestinians, while the Israeli military and navy keep attacking them, kidnapping them and confiscating their boats, in addition to the dozens of casualties, including fatalities, resulting from these violations.

It is worth mentioning that, under the Oslo Peace Agreement, signed between Israel and the Palestine Liberation Organization in 1993, the fishing zone was set at twenty nautical miles, where the Palestinians are supposed to be able to fish and sail, but Israel kept violating the agreement.

Gaza Strip: Attacks in the border areas and their consequences