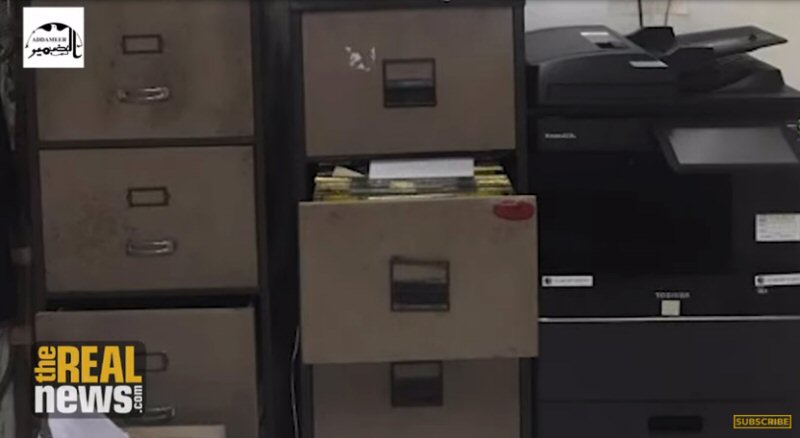 From the time he began work as a civil rights organizer, at age 14, Marc Steiner has dedicated his life to issues of human rights and social justice. Early in his career he worked with at-risk youth, using counseling and theatrical techniques, and taught theater for 10 years, at the Baltimore School for the Arts. The Marc Steiner Show began broadcasting on Baltimore’s NPR airwaves in 1993, and, since then, Steiner has become one of Maryland’s most recognized voices, and gained national acclaim for his insightful style of interviewing. In 200,7 he won a Peabody Award, the most distinguished honor in broadcast media. Steiner was the visionary force behind the founding of WYPR, and he also founded the Center for Emerging Media, a non-profit media production company with a mission to showcase new voices, tell stories that need to be told, and use the media to help heal our world.

Good to have you with us. On Thursday at 2 AM, heavily armed Israeli troops raided the offices of the Addameer Organization. Addameer is a legal defense organization in Palestine and Israel, whose offices are at the heart of the Palestinian city of Ramallah, which is in Area A, supposedly under the political and security jurisdiction of the Palestinian Authority. Israeli soldiers entered the office, damaging and seizing computers along with memory chips from cameras, and private documents were taken. On the following day, Addameer held a press conference to report the raid and protest it. And here’s Shatha Odeh, who’s representative of the Palestinian forum, Palestinian non-governmental group, speaking at that press conference.

SHATHA ODEH: Israeli occupation forces raided on the early hours of today, September 19th, 2019, the office of Addameer Prisoner Support and Human Rights Association in Ramallah. The forces stole a number of laptops in addition to several other belongings. They left the place after searching it and looking into its belongings. According to testimonies for the residents around the office, the soldiers came at around 2:00 AM. They raided the office, which was in the first floor of the Sebat building located in Mousa Tawasheh, next to Al Rafidein Square. According to Addameer staff, the soldiers searched the office and confiscated five laptops, three memories of laptops, one laptop card, one camera memory and several books. The soldiers, in fact, left a piece of paper written on it, “the stolen belongings.”

MARC STEINER: Addameer is an organization, as I said, for prisoner’s rights and human rights that provides legal assistance and information for Palestinian prisoners held in Israeli and Palestinian prisons and jails. In Arabic, Addameer means “conscience.” In Palestine and Israel it’s very well-known and an important organization, but the international media barely covered the military raid on their offices in part because the media was focused on Israeli elections and may have been also because the Israeli government’s strategy to ensure that this was backed up till later.

This is not the first time when Israeli forces raided Addameer’s offices. And we are joined now by Sahar Francis who has been the general director of the Ramallah based organization Addameer, a prisoner support and human rights organization since 2006. And Addameer is an NGO and provides legal advocacy support for political prisoners, both in Israel and Palestine. For over 20 years, Sahar Francis has been a human rights lawyer. She serves on the board of the defense for Children International and on the Union of Agricultural Work Committees. Welcome. Good to have you with us here on The Real News, Sahar.

MARC STEINER: Let’s just begin. For many of our viewers who may not even know about Addameer, what you do, just very briefly describe your work, the numbers of people you are working with and why.

SAHAR FRANCIS: As you said, we are a legal, service-oriented organization that offers free representation for the Palestinian political prisoners under the Israeli occupation and the Palestinian Authority side. We do advocacy on their behalf and we do monitor violations and other form of ill treatment that they face through our visitation program. We have 25 people in the office and our office is based in Ramallah actually at Area A [inaudible].

MARC STEINER: You said Area A, so let’s talk about this for a minute. Area A. As we know, there’s this very convoluted way that that whole area, the whole part of Israel and Palestine are divided up for control. But Area A is where the Palestinian Authority is supposed to have control. So according to the Oslo Agreement that was signed many years back, Israeli troops are not supposed to go into Area A unless they are invited or if they’re in hot pursuit. So tell me why this happened the way it did? Why do you think there was this attack on your offices? Why do you think they waited until after the results of the election came in? So how does all this fit together?

SAHAR FRANCIS: Actually, it should be highlighted that since the Second Intifada actually in 2000, this division of Area A, B, and C is not existing actually because the Israeli Army is raiding the Palestinian cities specified as Area A every day. And whenever they want, whenever they claim that there are any militant, any military activity actually, they can enter Area A and arrest people. They do arrest people. They do confiscate cameras from the street. They raid offices of other NGOs or other institutions, so it’s not out of the sudden that they raided Ramallah in the 19th of September and raided our offices. This is the second time, actually, the third time. In 2002 and in 2012 they raided the offices of the Addameer. We believe that the fact that since a couple of years there’s an attack against the Palestinian human rights organizations, international organizations that support Palestinians, by the Israeli government and [inaudible] that they are trying to undermine our work. So this raid comes with the whole attack against the NGOs actually.

MARC STEINER: So, why do you think though it happened now? I mean, before the election, from what I was reading, Palestinian prisoners were able to receive some concessions from the Israeli prison authorities who seemed to want to avoid a hunger strike and any kind of a uproar while the election was going on, but then this took place. So what’s the political motive at the moment for doing it in this way, and why was Addameer attacked in this way? What do you think is behind all of that and the timing of all of this? What does that mean to you?

MARC STEINER: Excuse me, so you’re saying, as we speak, people are on a hunger strike or they were on this hunger strike during the election as well and we just didn’t know about it?

SAHAR FRANCIS: Exactly, exactly. There’s a few prisoners that they were getting through hunger strike for several weeks now. Some are demanding to end their administrative detention, and some they are demanding to stop all this jammer for the cell phones that the prison authority fixed in the last couple of months in order to affect the signal for the prisoners to contact their families. And it should be highlighted that the Palestinian prisoners, they don’t have any access for phones in the Israeli prisons inside Israel. So all of this attack, I see it of course against our work, the legal work and the advocacy work that we do.

Actually, there is always – the Israelis try to put the Palestinian human rights organizations in association with political parties because all of the political parties at the end of the day are illegal in Palestine. So this is the easiest way for them to claim that Addameer is a terrorist organization. And, this is I think what they were seeking in entering to our office. Maybe they thought that this is the  place where they can find the proof that we are a terrorist group.

MARC STEINER: So wait a minute. Let me just step back for just a minute. So has Addameer been called, officially called a “terrorist organization” by Israel or anybody else, or this is what you’re saying is a political supposition about what Israel is doing?

SAHAR FRANCIS: No, what I mean that the campaign I mentioned before against Palestinian civil society organizations like Addameer, like other organizations including Al-Huq for example, or Defense For Children. The NGO Monitor group and the UK Lawyers for Israel and UN Watch and other organizations that they are close to the Israeli government, they are reporting and issuing reports against the Palestinian organizations, claiming that we are supporting terror by being legal work or because we support BDS, and mainly because of our work in the international level, including the work versus the international criminal court.

MARC STEINER: Let’s talk a bit about what happened in this raid. Exactly what was taken, and what kind of information was seized at your office? I mean, you represent how many prisoners at the moment?

SAHAR FRANCIS: At the moment, around 250.

MARC STEINER: So you have 250 prisoners in both Palestinian and Israeli jails that you’re representing. What about the information that was taken and the computers? What was in there? What is the danger here? And how does that deal with all the work you’re doing and the privacy of the prisoners? I mean, what’s the consequences of this?

SAHAR FRANCIS: Of course. First of all, this is a violation for the secrecy right of the prisoners with their lawyers because our computers that they were taken, including of course information and specially visits that we do to the prisons to monitor torture and ill treatment and health conditions. So all this information should be part of the secrecy of the client and the lawyer. They violated this by taking five computers from the organization, including of course computers used for advocacy and other programs. We are not sure if they copied files or other documents from the office because they didn’t leave any indication about what exactly they took from the publications or the books. They just said in the piece of paper they left us in the front desk, in the reception that they took the five computers, books, and memory card of the camera that we use to document things and memories of the three laptops, other three laptops.

MARC STEINER: So one last quick question here. So, A, I’m very curious, do you have backup information to secure what you have? And, B, what comes next for you and the organization and what just happened?

SAHAR FRANCIS: Of course we have backups. So on the level of the information, we didn’t lose much. We can recover very soon. On the level of the property they stole, I don’t expect that we will get it back because from our experience in 2012 actually, they never gave back the computers that they stole at that time, claiming that they take them for security check, which didn’t end until now. So we don’t expect that we will get these computer back. How we will continue? Of course, we will continue in our work and in our struggle for the rights of these prisoners to be free of torture and getting a fair trial and not to be subjected for all these grave breaches that Israeli forces are committing.

MARC STEINER: It’s been a pleasure. And I’m Marc Steiner here for The Real News Network. Let us know what you think. Give us your ideas. Take care.