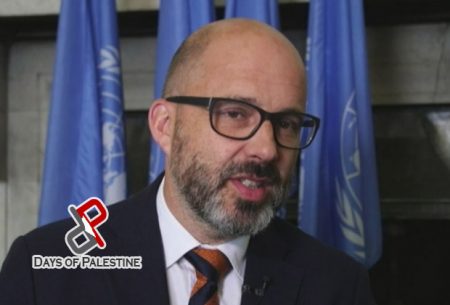 A United Nations’ official has publicly recognized that Israeli occupation authorities are stealing UN assistance heading to Palestinians in the occupied territories, a statement said.

Marking 50 years of the Israeli occupation of the Palestinian territories, the UN Coordinator for Humanitarian Aid and Development Activities Robert Piper said: “For humanitarians, this is the most long-standing protection crisis in the UN’s history.”

He continued: “It should be obvious, but it bears repeating, that occupation is ugly.  Living under foreign military rule for years on end, generates despair, suffocates initiative and leaves generations in a kind of political and economic limbo.”

Piper reiterated: “Israel’s occupation is backed by force. Accompanying that ever-present security apparatus have been deliberate policies that have isolated Palestinian communities from each other, ruptured social cohesion, profoundly limited economic activity and deprived many of their basic rights – of movement, of expression, of access to health and much more.

He stated, according to Days of Palestine: “In 2017, nearly half of the 4.8 million Palestinians living in the occupied Palestinian territory (oPt) will need humanitarian aid of one kind or another. Many of them require food assistance to compensate for lost livelihoods, others legal aid, and others still, will need water, healthcare or shelter.”

About the impact of the occupation, he said: “The worst impacts are felt by those most vulnerable – children, single mothers, the elderly and disabled.”

Piper added: “Humanitarians themselves face increasing obstacles in their efforts to mitigate the impacts of occupation, whether it be in increased movement restrictions, the exhaustion of legal processes, the confiscation of our aid, or understandable donor fatigue.

“As each year passes, the situation deteriorates inexorably, with profound consequences for Palestinians.”