Israel To Build Hundreds Of Colonialist Units In West Bank 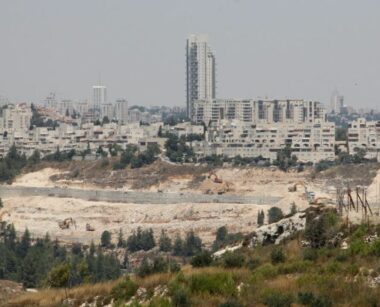 The Israeli government is planning the construction of at least 392 units in illegal Israeli colonies, on more than 432.1 Dunams of Palestinian lands.

The Maps Department of the Arab Studies Society has reported that an Israeli colonialist committee has announced it submitted a structural plan referenced as #410/5/66 aiming at annexing 128.5 Dunams to build 193 units and public facilities in the illegal Efrat colony, which was built on Palestinian lands in the al-Khader town, south of Bethlehem.

Another plan, referenced as 110/2/1, includes the detailed structural plan for building 179 units and public facilities on 290 Dunams, to expand the illegal Einav colony, which was built on stolen Palestinian lands in Ramin village, near the northern West Bank city of Tulkarem.

Another plan was also submitted, carrying the number 514/5, to expand the illegal Shim’a colony by constructing 20 units on 13.6 Dunams, owned by the residents of the ath-Thaheriyya town, near Hebron in southern West Bank.

Israel also approved the paving of a new 5-kilometer-long segregated road serving Rahalim illegal colony, which was built on lands owned by the Palestinians in the as-Sawiya village, south of Nablus, in northern West Bank.

The Maps department said Israel is escalating its plans for constructing and expanding its illegal colonies on Palestinian lands, in addition to its plan to pave or expand settler-only roads, by illegally annexing more Palestinian lands, to link between many colonies, especially since the current stance of the US Administration of Joe Biden remains “foggy” at its best.

It is worth mentioning that Israel also issued an order annexing a Dunam of Palestinian lands in Basin 1, in the al-Baq’a area, near a military base at the northern entrance of Teqoua’ town, east of Bethlehem.