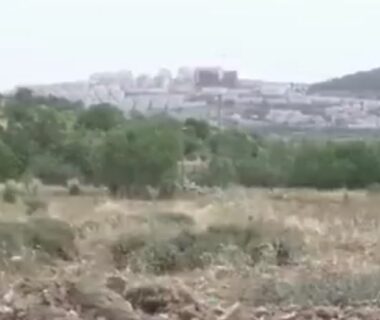 Israeli soldiers invaded, Wednesday, Palestinian agricultural lands, southeast of the West Bank city of Bethlehem, and informed a Palestinian that the army has confiscated his lands because the military considers them to be “state lands.”

Hasan Breijiyya, the head of the Bethlehem office of the Wall & Colonization Resistance Commission, stated that the lands, dozens of Dunams, are owned by a villager, identified as Yousef Rayyan.

Breijiyya added that the lands, including olive orchards and almond trees, are in the Khalayel al-Louz area.

The official also stated that the illegal annexation of the Palestinian lands is part of ongoing Israeli attempts, to confiscate all farmlands and orchards not only in Khalayel al-Louz, but also in Khallet al-Qoton and Khallet an-Nahla, so that Israel can expand its illegal colonies of Efrat and Tekoa’.

Also on Wednesday, the soldiers invaded a Palestinian village in the Jordan Valley of the occupied West Bank, and demolished it, rendering eleven families of 73 persons, including 41 children, without a shelter.