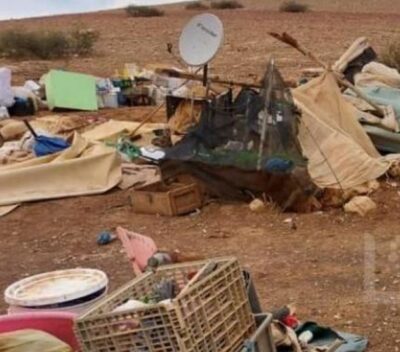 The Israeli army invaded, Wednesday, a Palestinian village in the Jordan Valley of the occupied West Bank, and demolished it, rendering eleven families of 73 persons, including 41 children, without a shelter.

A resident of the destroyed village, identified as Abdul-Ghani Awada, said the soldiers stormed the dwelling and informed the villagers that they have ten minutes to evacuate their homes.

The demolition did not only target residential structures, but also barns and water tanks used by the residents, and even led to killing some of their livestock, their main source of livelihood.

Bisharat stated that the demolition carried out by Israel is the worst and the largest in the Jordan Valley in twelve years.

The soldiers rolled into the village with their bulldozers, and demolished the residential sheds, barns, water containers, and even solar panels in addition to confiscating tractors and other vehicles owned by the villagers.

Bisharat said the demolitions, and displacement, are part of Israel’s illegal colonialist plans, aiming at annexing the Jordan Valley, as well as many vital areas of the West Bank, designated as Area C, so that it can continue to build and expand its colonies.

It is worth mentioning that Israel also repeatedly displaces Palestinian dwellings in the Jordan Valley for its military activities, including live-fire drills, which includes the use of shells and explosives.

In related news, the soldiers also stormed the communities of al-Borj, al-Meeta, and al-Farisiyya, in the Jordan Valley, and verbally informed the families that they need to evacuate their dwellings next week, on Tuesday and Wednesday.

The soldiers said that the army intends to conduct live-fire training, and its tanks will be rolling through these areas.

On his part, Palestinian Prime Minister, Dr. Mohammad Eshteyya, strongly denounced the latest Israel violations and crimes and called on the International Community to intervene and stop the continued displacement of the indigenous Palestinian people and the theft of their lands.

In a statement, the United Nations Office for the Coordination of Humanitarian Affairs in the occupied Palestinian Territory (OCHA-OPT) said that “humanitarian agencies visited the community and recorded 76 demolished structures, more than in any other single demolition in the past decade.”

“The destroyed properties – including homes, animal shelters, latrines, and solar panels – were essential to, livelihoods, well-being, and dignity of community members, whose rights have been violated.  Their vulnerability is further compounded by the onset of winter and the ongoing COVID-19 pandemic. Some of the demolished structures had been donated as humanitarian assistance,” OCHA added.

“So far in 2020, 689 structures have been demolished across the West Bank, including East Jerusalem, more than in any full year since 2016: rendering 869 Palestinians homeless. The lack of Israeli-issued building permits is typically cited as a reason, even though, due to the restrictive and discriminatory planning regime, Palestinians can almost never obtain such permits. Demolitions are a key means of creating an environment designed to coerce Palestinians to leave their homes.” OCHA

The destroyed and displaced Palestinian village is one of 38 Bedouin communities that were either fully or partially declared “firing zones” by the Israeli army.

The villages have extremely limited access to vital services, including infrastructure, water, electricity, in addition to health services and education.