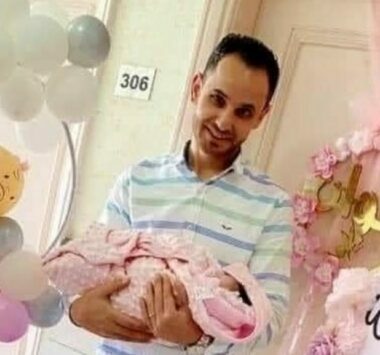 Updated: The slain Palestinian has been officially identified as Bilal Adnan Rawajba, 29, a married father of an infant girl, only three months of age. He is from Iraq at-Tayeh village, east of Nablus, in northern West Bank.

Eyewitnesses said the soldiers prevented Palestinian medics from approaching the vehicle he was driving, despite his serious wounds, and he bled to death.

It is worth mentioning that Bilal was a captain, working as a legal Counselor with the Palestinian Preventative Security Department in the Tubas governorate, in northeastern West Bank.

He was shot, on Wednesday morning, near Huwwara military roadblock, south of Nablus. The Maan News Agency published a photo from the incident showing the Palestinian still in the driver seat when he was shot by the soldiers who fired a barrage of live rounds at him.

Several shots, fired by the soldiers, could be heard in a video captured by a Palestinian while waiting in a car near the roadblock.

In a brief statement, the Israeli army said its soldiers foiled what it described as “an attempted shooting attack” by “neutralizing the attacker,” and added that no soldiers were hurt.

In addition, Israeli daily Haaretz quoted the army claiming the Palestinian fired two shots at the soldiers before they fired back and killed him.

The army closed the military roadblock after the incident, preventing the Palestinians from crossing.