Israel To Demolish A Building In Shu’fat Refugee Camp 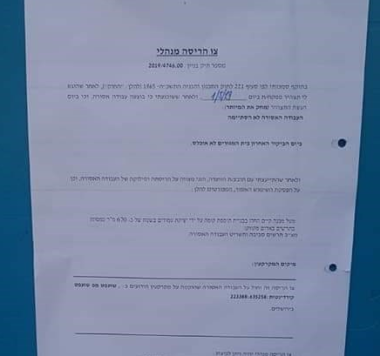 Israeli soldiers and personnel of the Interior Ministry in occupied East Jerusalem invaded, on Wednesday morning, Shu’fat refugee camp, and delivered an order for the demolition of a building, used for weddings and other social events.

Mahmoud Sheikh, the head of the Popular Committee in Shu’fat refugee camp, said the City Council intends to demolish a section of the building, which will render it all unsafe.

He added that the soldiers informed him that, if the building is not demolished by this coming Monday, the city will destroy it and bill the Palestinians for the costs in addition to higher fines and fees.

Sheikh also said that the section targeted with the demolition order was constructed nearly 20 years ago, and was recently rehabilitated to allow the Palestinians to use the building for their social events.

He stated that, ten days ago, the Interior Ministry and the City Council, issued orders halting the rehabilitation of the building, before the Palestinians headed to the UNRWA, and today, the demolition order was officially posted.

Sheikh said the new order is part of Israel’s ongoing policies, targeting the refugees in occupied Jerusalem, in addition to targeting the UNRWA to end its aid services, including its clinics and schools.