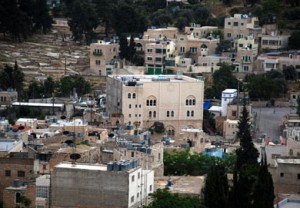 The Palestinian Authority on Tuesday condemned an announcement the previous day by the Israeli government that they would allow the expansion of a Jewish-only settlement in Hebron to allow an additional 100 Israelis to construct houses on illegally-seized Palestinian land.

The new houses will be constructed on an Israeli military base inside the city of Hebron along al-Shuhada Street in the central city.

They will expand the Israeli settlement of Beit Romano, which houses a yeshiva school. It was previously a Palestinian boy’s school, which was shut down in the early 1980s by the Israeli military for ‘security reasons’ and then reopened as a Jewish-only school soon after.

The military base on the site, which will be part of the settlement expansion, was constructed in the 1980s as well, on what had been the Hebron bus station.

It is surrounded by watchtowers, most of which are located on Palestinian-owned buildings.

Israel’s decision to allow the expansion of the settlement was criticized by Israeli peace organizations, and by the Palestinian Authority.

The Governor of Hebron, Kamal Hmeid, said that this settlement expansion demonstrates a collusion between the government and the settlers.

The group Peace Now said the expansion of the Hebron settlement constitutes a “right of return for Jews only”. This is in reference to the internationally recognized right of return of refugees, which has been denied to Palestinians since their expulsion from what is now Israel when it was created in 1948.

Although Israeli settlers have been expanding outposts and settlements in the Hebron area continuously, this is the first expansion that has been pre-approved and sanctioned by the Israeli government in a decade.